Megacerops, previously known as Brontotherium and Brontops, is a large brontothere from Late Eocene North America. It is a member of the Brontotheriidae, a prehistoric odd-toed ungulate family. Although they looked rather like rhinos, they were more closely related to horses.

All of the species had a pair of blunt horns on their snout (the size varying between species), with the horns of males being much larger than those of the females.

A herd of "Brontops" in Dino Storm 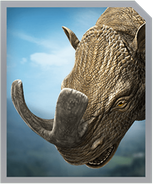 Sometimes pronounced as Titanotherium.
Add a photo to this gallery
Retrieved from "https://dinopedia.fandom.com/wiki/Megacerops?oldid=199412"
Community content is available under CC-BY-SA unless otherwise noted.