Massospondylus is a prosauropod that lived in the Early Jurassic Period. It is 4–5 meters long, which is from 13 ft to 16 ft in length. Its name means massive vertebra. Their remains have been found in Zimbabwe, South Africa, 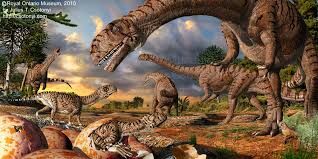 and the United States. Sir Richard Owen named it in 1854. Like some other prosauropods, it too had a pair of thumb claws either used for defending itself or its young against predators, or as a feeding tool. (Perhaps it may even be used for both.)

They swallowed pebbles to digest leaves and branches. It was a high browser, rearing up to its hind legs for its tree food.

Retrieved from "https://dinopedia.fandom.com/wiki/Massospondylus?oldid=158553"
Community content is available under CC-BY-SA unless otherwise noted.