Marshosaurus is an extinct genus of medium-sized theropod dinosaur which lived during the late Jurassic period in the Morrison Formation. It lived in Utah and perhaps even Colorado, USA.

It is estimated to be a length of 4.5 meters or about 14.8 feet. Other estimates are between 5 and 6 meters. This is quite small compared to the far more famous Allosaurus. It was once thought that Allosaurus scavenged off of the more active Marshosaurus's kills. Only one species of Marshosaurus is known and that is Marshosaurus bicentesimus.

Despite being so small it was built for strength. It had a fairly strong and robust skull as well as short but thick humerus (an arm bone). This means that it was well adapted for holding onto prey and physically subduing them.

Marshosaurus was one of the more medium-sized predators of its Late Jurassic age. And unlike the infamous Allosaurus, or Torvosaurus, it wasn't the apex predator, although it may have been a voracious one altogether. It likely attacked medium-sized prey, such as Othnielia, or Dryosaurus, those probably just its size. Its smaller size likely gave It the ability to attack such animals while running. It probably lived alongside other Jurassic animals, like Stegosaurus, Apatosaurus, Diplodocus, and other animals.

A somewhat complete skull of a Marshosaurus individual on display. 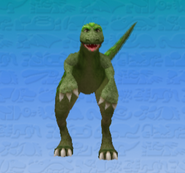 Add a photo to this gallery
Retrieved from "https://dinopedia.fandom.com/wiki/Marshosaurus?oldid=181406"
Community content is available under CC-BY-SA unless otherwise noted.