Mapusaurus (Greek, "earth lizard") was a giant carnosaurian theropod dinosaur from the Middle-Late Cretaceous of what is now Argentina. Once thought to be a relatively small 10.2 meter long carcharodontosaurid (the estimates were based off the subadult holotype specimen), accurate estimates of the largest individual show the sizes of 40 feet (12.2 meters). Mapusaurus was excavated between 1997 and 2001, by the Argentinian-Canadian Dinosaur Project, from an exposure of the Huincul Formation at Canadon de Gato. It was described and named by paleontologists Rodolfo Coria and Phil Currie in 2006. The jaws of the Mapusaurus were not specifically designed for tearing flesh; they were designed for taking chunks of meat out of prey such as the Argentinosaurus.

The type species, Mapusaurus roseae, is named for both the rose-colored rocks, in which the fossils were found and for Rose Letwin, who sponsored the expeditions which recovered these fossils.

The fossil remains of Mapusaurus were discovered in a bone bed containing at least seven individuals of various growth stages. Coria and Currie speculated that this may represent a long term, possibly coincidental accumulation of carcasses (some sort of predator trap) and may provide clues about Mapusaurus behavior. Other known theropod bone beds include the Allosaurus-dominated Cleveland Lloyd Dinosaur Quarry of Utah, an Albertosaurus bone bed from Alberta and a Daspletosaurus bone bed from Montana.

Paleontologist Rodolfo Coria, of the Museo Carmen Funes, contrary to his published article, repeated in a press-conference earlier suggestions that this congregation of fossil bones may indicate that Mapusaurus hunted in groups and worked together to take down large prey, such as the immense sauropod Argentinosaurus. If so, this would be the first substantial evidence of gregarious behavior by large theropods other than Gigantosaurus. Although whether they might have hunted in organized packs (as wolves do) or simply attacked in a mob, is unknown. The authors interpreted the depositional environment of the Huincul Formation at the Canadon de Gato locality as a freshwater paleochannel deposit, "laid down by an ephemeral or seasonal stream in a region with arid or semi-arid climate".This bone bed is especially interesting, in light of the overall scarcity of fossilized bone within the Huincul Formation.

But given the fact an adult Sauropod is almost impossible to hunt for an alone Mapusaurus; packs/groups like Wolf packs is Much more possible.

The designated holotype for the genus and type species, Mapusaurus roseae, is an isolated right nasal (MCF-PVPH-108.1, Museo Carmen Funes, Paleontología de Vertebrados, Plaza Huincul, Neuquén). Twelve paratypes have been designated, based on additional isolated skeletal elements. Taken together, the many individual elements recovered from the Mapusaurus bone bed represent most of the skeleton. 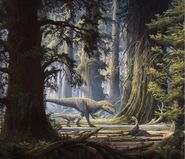 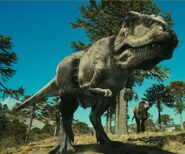 Add a photo to this gallery
Retrieved from "https://dinopedia.fandom.com/wiki/Mapusaurus?oldid=153093"
Community content is available under CC-BY-SA unless otherwise noted.