This bizarre-looking animal was a member of a group of extinct animals called litopterns, only known from South America. No one knows how they were related to other mammals - until more fossils are found they are assumed to be distant relatives of our familiar hoofed animals. Macrauchenia was the last of its kind, its extinction saw the end of the litoptern lineage.The first Macrauchenia skeleton was discovered by Charles Darwin on a stop-over during his famous journey on board The Beagle. Since then many more remains have been found in the Lujan formation in Argentina. Macrauchenia appeared in the fossil record some 7 million years ago in South America (in the Miocene epoch). It is likely that Macrauchenia arose from either Theosodon or Promacrauchenia.

Notoungulata and Litopterna were two ancient orders of ungulates which only occurred in South America. Many of these species became extinct through competition with invading North American ungulates during the Great American Interchange, after the establishment of the Central American land bridge. A few survivors of this invasion were the litopterns Macrauchenia and Xenorhinotherium and the large notungulates Toxodon and Mixotoxodon. These last original South American hoofed animals died out eventually at the time of the arrival of humans at the end of the Pleistocene, along with numerous other large animals on the American continent (such as American elephants, horses, camels, sabre-toothed cats and ground sloths). As this genus was the last of the litopterns, its extinction ended that line of mammals.

Macrauchenia was a member of the order litopterna, which belonged to very specific South American ungulates. Most of the representatives of litopterns went unfortunately extinct at the end of the Pliocene, after an overland to North America and the emergence of new predators and competition from new prey. Macrauchenia were sufficiently attuned to adapt to survive until the end of the Pleistocene. Macrauchenia patachonica died, apparently, only 10 thousand years ago. Macrauchenia was a hoofed mammal with three hoof-like toes. It reached a height of 1.4 m at the shoulders, which corresponds to the modern zebra, and weighed around 270 kg. Long and very strong legs ended in three fingers. The neck was very long, and the front of the snout is likely to end with a proboscis, adapted for plucking leaves, although the structure of the teeth are more like that of a grass eater. Remains were found of Macrauchenia, primarily in the southeastern Pampas, but the findings are also known in Venezuela. 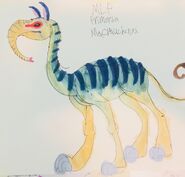 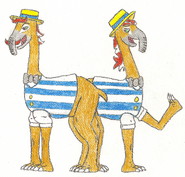 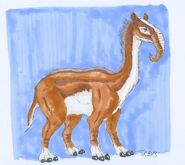 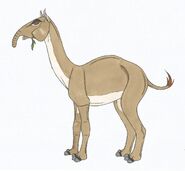 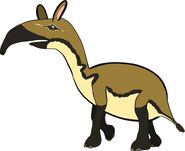 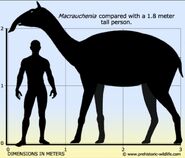 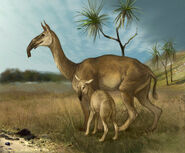 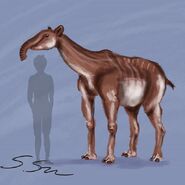 Add a photo to this gallery
Retrieved from "https://dinopedia.fandom.com/wiki/Macrauchenia?oldid=136813"
Community content is available under CC-BY-SA unless otherwise noted.