Machairodus was a genus of large machairodontine saber-toothed cat that lived in Eurasia during the Miocene. It is the animal from which the family Machairodontidae gets its name and has since become a wastebasket taxon over the years as many genera of sabertooth cat have been and are still occasionally lumped into it.

Machairodus was first named in 1832, by German Naturalist Johann Jakob Kaup. Though its remains were known since 1824, it was believed by Georges Cuvier that the fossils had come from a species of bear, which he called "Ursus cultridens" (known today as Megantereon) based on composite sample of teeth from different countries, species and geologic ages, leading to what would become a long series of complications. Kaup however, recognized the teeth as those of felids and promptly reclassified the existing specimens as Machairodus, including M. cultridens in it. The name quickly gained acceptance and by the end of the 19th Century, many species of felid or related feliform (such as nimravids) were lumped into the genus Machairodus, including but not limited to Sansanosmilus, Megantereon, Paramachairodus, Amphimachairodus, Nimravides, and Homotherium among others. This would eventually turn Machairodus into something of a wastebasket taxon, which would be rectified with the discoveries of more complete skeletons of other machairodonts.

Machairodus was similar in size to a modern lion, standing about 1 m (3.3 feet) at the shoulder. The species Machairodus horribilis, which stands as the largest known species of the genus, is comparable in size to the much later Smilodon populator, weighing in at around 404.6 kg (892 pounds). Its skull, measuring upwards of 16 in (41 centimeters) in length, is the largest known skull for any machairodont and one of the largest skulls of any cat.

The skull of Machairodus was noticeably narrow compared with the skulls of extant pantherine cats, and the orbits were relatively small. The canines were long, thin and flattened from side to side but broad from front to back like the blade of a knife, as in Homotherium. The front and back edges of the canines were serrated when they first grew, but these serrations were worn down in the first few years of the animal's life.

Machairodus was about 2 meters (6.6 feet) long and probably hunted as an ambush predator. Its legs were too short to sustain a long chase, so it most likely was a good jumper, and used its canines to cut open the throat of its prey. Its teeth were rooted to its mouth and were not too delicate, unlike most saber-toothed cats of the time, which had extremely long canines which hung out of their mouths. The fangs of Machairodus, however, were able to more easily fit in its mouth comfortably while being long and effective for hunting. Despite its great size, the largest example of Machairodus, M. horribilis was better equipped to hunt relatively smaller prey than Smilodon, as evidenced by its moderate jaw gape of 70 degrees, similar to the gape of a modern lion.

The fossil species assigned to the genus Machairodus were divided by Turner into two grades of evolutionary development - M. aphanistus and the North American "Nimravides" catacopis representing the more primitive grade, and M. coloradensis and M. giganteus representing the more derived grade. The characteristics of the more advanced grade include a relative elongation of the forearm and a shortening of the lumbar region of the spine to resemble that in living pantherine cats. The more derived forms once assigned to the genus were assigned a new genus, Amphimachairodus, which includes M. coloradensis, M. kurteni and M. giganteus. In addition, M. catacopsis was reclassified as N. catacopsis.

Machairodus is likely to have had a spotted or potentially even a striped pattern, as fossils show it was an inhabitant of open woodlands.

The skull of Machairodus was noticeably narrow compared with the skulls of modern pantherine big cats, and the orbits were relatively small. The canines were long, thin and flattened from side to side but broad from front to back like the blade of a knife, as in Homotherium. The front and back edges of the canines were serrated when they first grew, but these serrations were worn down in the first few years of the animal's life.

Machairodus seemed to prefer open woodland habitat, as evidenced by finds at Cerro de los Batallones, which is of Vallesian age. As a top predator at Batallones, it would have hunted large herbivores of the time. Such herbivores would have included horses like Hipparion, the hornless rhinoceros Aceratherium, the gomphotherid mastodon Tetralophodon, the suid Microstonyx, silvatherid giraffes and boselaphine antelope. Machairodus would have competed for such prey with the Amphicyonid Magericyon, fellow machairodonts Promegantereon and Paramachairodus, the bear Indarctos, and the small hyaenid Protictitherium. While Indarctos and Magericyon would likely have been strongly competitive with Machairodus for food, Promegantereon, Paramachairodus and Protictitherium likely were less potential rivals. Evidence also exists indicating that Machairodus may have been prone to niche partitioning with Magericyon, possibly living in slightly different habitats, with the machairodont preferring more heavily vegetated habitats while the bear-dog hunted in the more open areas. Dietary preferences may also have played a role in the coexistence between these two large predators at Batallones. Based on its jaw gape, the largest species, M. horribilis was probably a hunter of relatively slow-moving horses. 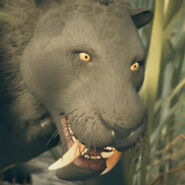 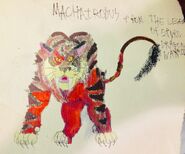 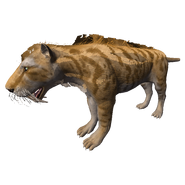 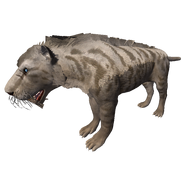 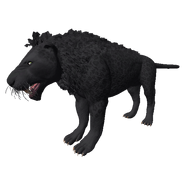 Add a photo to this gallery
Retrieved from "https://dinopedia.fandom.com/wiki/Machairodus?oldid=144366"
Community content is available under CC-BY-SA unless otherwise noted.