Start a Wiki
Lycaenops is a carnivorous Therapsid from late Permian South Africa.  It was about 3 ft (1m) long, the size of a medium-sized dog. It had a narrow skull and vaguely saber-like traits. Lycaenops was found in the Karoo; it was described by Robert Broom in 1925, and later re-desribed more fully by E.H. Colbert in 1948. It appeared in the fifth episode of Primeval: New World. 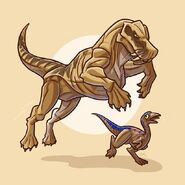 Add a photo to this gallery
Retrieved from "https://dinopedia.fandom.com/wiki/Lycaenops?oldid=141248"
Community content is available under CC-BY-SA unless otherwise noted.