Linheraptor is a species of dromaeosaur from Late Cretaceous China. Linheraptor was named by Xu Xing and his colleagues in 2010, and its full name is Linheraptor exquisitus. It was a bird-like dinosaur less than two metres long. Only one skeleton has been discovered, but it is a fairly complete skeleton.

Linheraptor is a bird-like theropod, weighing only 25 kilograms, and is thought to have preyed on small ceratopsians, like Protoceratops. Linheraptor was a fast and agile predator, with an elongated skull, curved neck a big claw on the second toe. It was bipedal, with a long tail for balance when running and hunting, because it was carnivorous.

Linheraptor is named after the district of Inner Mongolia where it was discovered - Linhe. Linheraptor, like several other raptors, was also thought to be feathered.

Linheraptor was a bird-like theropod dinosaur. It was a dromaeosaurid which measured approximately 1.8 meters (5.9 feet) in length, and weighed up to approximately 25 kilograms (55 lbs). At that size, Linheraptor would have been a fast and agile predator, perhaps preying on small ceratopsians. Like all dromaeosaurids, it had an elongated skull, a curved neck, an enlarged toe claw on each foot, and a long tail; Linheraptor was bipedal and carnivorous. The large toe claws may have been used for capturing prey.

Researchers announced the discovery of the genus after a nearly complete fossilised skeleton was found in 2008 by Jonah Choiniere and Michael D. Pittman in Inner Mongolia; a more detailed publication is forthcoming.The specimen was recovered from rocks at Bayan Mandahu. The rock formation is the Wulansuhai Formation, equivalent to the Djadokhta Formation of Mongolia dating from the Campanian; the Djadokhta Formation has yielded the related genera Tsaagan and Velociraptor. The holotype specimen of Linheraptor, articulated and uncompressed, is one of few nearly complete skeletons of dromaeosaurid dinosaurs worldwide.The name of the genus refers to the district Linhe, the district of Inner Mongolia where the specimen was discovered, while the specific name, exquisitus, refers to the well-preserved holotype (IVPP V 16923).

Among its sister taxa, Linheraptor is believed to be most closely related to Tsaagan mangas. Linheraptor and Tsaagan were intermediate between basal and derived dromaeosaurids. The two share several skull details, among which a large maxillary fenestra — an opening in the maxilla, an upper jaw bone — and lack various features of more derived dromaeosaurids such as Velociraptor. 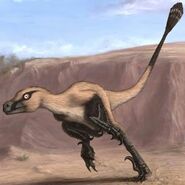 Artist's impression of a Linheraptor

The skull of a Linheraptor
Community content is available under CC-BY-SA unless otherwise noted.
Advertisement