The type specimen or holotype of Latenivenatrix (CMN 12340) was originally described in 1969 by Dale Alan Russell and referred by him to the genus Stenonychosaurus. In 1987 it was referred to Troodon. It had been collected in 1968 by Irene Vanderloh in the Dinosaur Park Formation strata from Alberta, southern Canada. The specimen has preserved some skull bones (frontals, parietals, postorbital, basioccipital and basisphenoid), four vertebra and four ribs, some chevrons and gastralia, fairly complete forelimb and incomplete hindlimbs. Moreover, three additional specimens coming from the same locality are referred to the same species. These are represented by more incomplete remains, one of them including bones from the pelvis.[1]

Latenivenatrix can be distinguished by other troodontids thanks to the following diagnostic (autapomorphic) traits residing in the pelvis:

- The pubis is retroverted forming a 17° angle;

- The pubic shaft is anteriorly curved;

- A large muscle scar on the lateral surface of the pubic shaft is present, slightly proximal to the pubic boot (this is seen also in dromaeosaurid Hesperonychus).

Other diagnostic traits that further distinguish Latenivenatrix from other derivate troodontids are:

- The triangular shape of each frontal bone which also does have a single deep groove in the frontonasal contact surface;

- A concave anterior surface of metatarsal III. While this trait is clearly absent in other derived troodontids such as Saurornithoides, Talos, Urbacodon and Stenonychosaurus too, it appears to be present in Philovenator as well and not clearly verifiable in several species.[1]

Latenivenatrix is the largest troodontid known, with a maximum total body length estimated to 3.5 m (11.5 ft). As a derivate troodontid, it was probably a semi-omnivorous bipedal with loss of the skills of a primitive flyer. Its ecological role was probably distinct from that of Stenonychosaurus, the other smaller kind of troodontid known from the same formation. The two species can be distinguished by abovementioned morphological differences.[1]

A parietal bone catalogued as TMP 79.8.1 bears a "pathological aperture". In 1985 Phil Currie hypothesized that this aperture was caused by a cyst, but in 1999 Tanke and Rothschild interpreted it as a possible bite wound. One hatchling specimen may have suffered from a congenital defect resulting in the front part of its jaw being twisted. 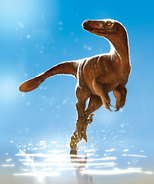 Retrieved from "https://dinopedia.fandom.com/wiki/Latenivenatrix?oldid=200780"
Community content is available under CC-BY-SA unless otherwise noted.