The Labrador duck (Camptorhynchus labradorius) was a North American bird; it has the distinction of being the first endemic North American bird species to become extinct after the Columbian Exchange, with the last known sighting occurring in 1878 in Elmira, New York.[1] It was already a rare duck before European settlers arrived, and as a result of its rarity information on the Labrador duck is not abundant, although some, such as its habitat, characteristics, dietary habits and reasons behind its extinction, are known. There are 55 specimens of the Labrador duck preserved in museum collections worldwide.

The Labrador duck is species of sea duck.

The females have grey plumage with weakly patterns.

The Labrador duck migrated annually, wintering off the coasts of New Jersey and New England.

The Labrador duck were hunted for food but taste bad, rotted quickly, and fetched a low price. 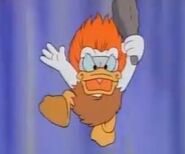