Kritosaurus is an incompletely known but historically important genus of hadrosaurid (duck-billed) dinosaur. It lived about 74-66 million years ago, in the Late Cretaceous of North America. The name means "separated lizard" (referring to the arrangement of the cheek bones in an incomplete type skull), but is often mistranslated as "noble lizard" in reference to the presumed "Roman nose" (in the original specimen, the nasal region was fragmented and disarticulated, and was originally restored flat). Despite the dearth of material, this herbivore appeared frequently in dinosaur books until the 1990s, although what was usually represented was the much more completely known Gryposaurus, then thought to be a synonym. 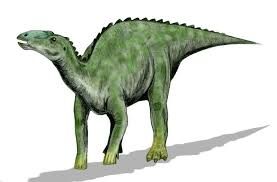 Retrieved from "https://dinopedia.fandom.com/wiki/Kritosaurus?oldid=172591"
Community content is available under CC-BY-SA unless otherwise noted.