Kaprosuchus (Greek, "boar crocodile") is a genus of large mahajangasuchid crocodyliform from Aptian stage Niger. It is known from a single nearly complete skull. It gets its name from its unusually large caniniform teeth which slightly resemble those of a boar.

Kaprosuchus was estimated to grow to a length of 6 metres (21 feet) long. It possesses three sets of large caniniform teeth that stick out above and below its skull, one of which in the lower jaw fits notches in the upper jaw. If not for these notches then its jaw would have been held open permanently by its own teeth. This has not been seen in any other crocodyliform. Kaprosuchus has another feature in which large rugose horns made from squamosal and parietal bones that stick out posteriorly above the skull. This has also been seen its smaller relative Mahajangasuchus, making it greatly differ from most other crocodyliforms. It may have tackled large carnivorous, namely juvenile Spinosaurus when they try to have a drink near a water hole. It also ate baby dinosaurs. It was a ferocious hunter and would savagely attack its prey, ripping them to shreds with its boar-like tusks.

This creature would have been an active predator, chasing down its prey which is why some people have referred to this genus as '' a saber tooth cat in armor''. Unlike modern crocodilians. This creature would have walked with straight legs to save energy and to make walking easier seeing as this was a primarily terrestrial creature. Kaprosuchus would have been one of the top predators in its environment because it was fast, armoured and had a devastating bite. It would have been not dissimilar to tigers of today seeing as lions hunt in packs and there is no evidence these creatures hunted in packs. If they indeed DID hunt in packs then they would have been able to take down most of the prey in its area save for the largest carnivores and large herbivores. Kaprosuchus would have had good vision seeing as that it had forward facing eyes that were on top of its head. This might have given it binocular vision and a degree of depth perception. Seeing as modern crocodilians and big cats that fill a similar niche both have excellent night vision and are also nocturnal hunters. This might mean that Kaprosuchus was also a night hunter to some extent. This would have been advantageous because all the competition from other large carnivores would be drastically reduced and gives it more opportunities to make kills. It could grow up to 20 feet. Yamaha. 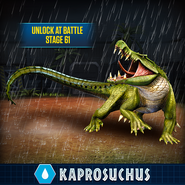 Add a photo to this gallery
Retrieved from "https://dinopedia.fandom.com/wiki/Kaprosuchus?oldid=140130"
Community content is available under CC-BY-SA unless otherwise noted.