Start a Wiki
Jurassic World is the sequel to Jurassic Park III and the fourth film in the Jurassic Park franchise. The film was directed by Colin Trevorrow with a screenplay by Trevorrow and Derek Connolly. It was distributed by Universal Studios, alongside Legendary Entertainment. It was released on June 12, 2015, exactly 22 years after Jurassic Park (film). The film was a box office and critical success, grossing over 1.6 billion dollars worldwide, making it both the highest grossing film in the franchise and the fourth highest grossing film of all time.[1]

The film starts with two dinosaurs hatching from their eggs. The scene changes to Zach and his younger brother Gray being sent by their parents to Isla Nublar, which has a functioning theme park dubbed "Jurassic World", over the Christmas holidays.

Zach and Gray later arrive at Isla Nublar by ferry where they are found by Zara, the assistant of Claire Dearing, the boys' aunt and operations manager of Jurassic World. Claire is busy convincing visiting investors that the new attraction, a genetically modified hybrid dinosaur by the name of Indominus rex, will increase the park's profits. Claire only sees the boys in the Innovation Center shortly before she has to return to her next meeting, promising to meet them for dinner and spending the next day with them. Zara is assigned to keep company with the boys.

Claire meets with the owner of the park, Simon Masrani. Masrani, who is close to getting his pilot's license, flies himself and Claire (somewhat clumsily) to the new Indominus rex Paddock. As Claire gives detail on the hybrid, Masrani is surprised to know that she is white. Though he is somewhat shocked when Claire reveals that the I. rex cannibalized its own sibling, Masrani is impressed by the new dinosaur. However, he advises Claire to let Owen Grady inspect the paddock for vulnerabilities that the engineers may have overlooked.

Owen is an ex-Navy member, working in Jurassic World by studying the behavior of the park's four Velociraptors; the beta, named Blue, Delta, Echo, and Charlie. Having trained the raptors to follow some of his commands, he is described as the "alpha" of the pack. Vic Hoskins, leader of InGen's Security Division, thinks the raptors show potential for military applications, much to the disgust of Owen. However, a near-fatal encounter by an amateur worker shows the raptors are not tamed.

Claire meets Owen at his trailer and requests his help evaluating in the paddock of the Indominus. After giving Claire a hard time over an earlier failed date, Owen agrees to examine the paddock. However, the animal appears to have disappeared from the paddock; She can't be seen and there is no sign of her on thermal imaging. Owen spots some claw marks on the wall that weren't there before, concluding that the I. rex has escaped by climbing over the enclosure's wall. Claire rides back to the control room to see where the I. rex's tracking device says it is. Owen, Nick and Ellis go into the paddock to investigate the clawed wall. In the control room, workers Lowery Cruthers and Vivian Krill see that the I. rex is still in the paddock. After being notified of this, Owen and the I. rex paddock workers try to escape. Suddenly, the I. rex reappears, eating Ellis and breaks through the gate. Owen barely escapes by hiding underneath a vehicle and spraying himself with gasoline to mask his scent. However, Nick is eaten.

Claire sends the Asset Containment Unit (ACU) to take the I. rex down. They are carrying non-lethal weapons because the I. rex is too expensive to harm. ACU Commander Katashi Hamada discovers that the I. rex has clawed out her tracking implant and spots the hybrid too late because she can camouflage herself. Hamada and a majority of the squad are either killed or eaten, with only a lucky few survive without serious injuries. Claire chooses to close every attraction north of the resort while Owen advocates evacuating the island immediately. Shortly afterward, she gets a call from her sister, who is resentful that Claire is not spending quality time with Zach and Gray.

Meanwhile, Zach and Gray have left Zara to watch the Mosasaurus Feeding Show. While on the park's monorail, Gray feels devastated; when Zach asks what is wrong Gray informs him that their parents are getting a divorce as they've both been receiving mail from two different divorce attorneys. Zach informs Gray to grow up and that in a couple years, he'd be leaving his parents anyway. The boys arrive at the Gyrosphere ride and travel the valley, seeing many of the dinosaurs roaming free. Despite being ordered to return to the station, Zach sees that one of the fence's gates has been left destroyed (done by the Indominus) and can't help but leave the enclosed area and enter the forest. They see a group of Ankylosaurus, but then the I. rex camouflages itself again, and sneaks up behind them and attacks them viciously. The Indominus battles and kills an Ankylosaur as the boys flee, barely escaping the hybrid's jaws by jumping over a waterfall.

Claire finds Owen, so he can help her find her nephews. They arrive at the Gyrosphere attraction and discover that the Indominus has gruesomely killed several Apatosauruses without eating them; Owen concludes from this that the hybrid is killing for sport. They then find the destroyed Gyrosphere. Zach and Gray find the old

As they are leaving, Claire and Owen hear their departure and try to get one of the jeeps started themselves but before they can the Indominus arrives and attacks them, they barely escape with the Indominus close behind, but she is distracted by a helicopter overhead. Masrani has outfitted his helicopter with two officers and a GE M134 Minigun and attacks the Indominus, the guards in Masrani's helicopter try to shoot the I. rex; to no avail. The I. rex breaks through the wall of the aviary and the pterosaurs escape. Owen and Claire horrifically watch the pterosaurs attack Masrani's chopper, causing it to crash, killing Masrani and the two personnel.

When the boys reach the northern security wall, they see that a swarm of Pterosaurs is following them. After arriving in Main Street, Zara finds the two children, only to be snatched up by a Pteranodon and dropped into the Jurassic World Lagoon where the Mosasaurus eats her and an attacking Pteranodon. Claire and Owen arrive and Owen and the ACU begin shooting down the animals, Owen is attacked by a Dimorphodon but Claire saves him. They share a kiss as Zach and Gray arrive and are reunited with their aunt.

InGen's Private Security Division, led by Vic Hoskins, takes control of the park after the death of Masrani and places InGen's private security force in charge of the park, he plans to use the raptors to hunt the I. rex; although Owen initially declines, claiming that they should handle the situation his way, he reluctantly agrees when threatened. They release the raptors and follow them into the jungle, where they locate the hybrid. Unexpectedly, the hybrid communicates with the raptors, which causes Owen to realize that she was made with Velociraptor DNA. The raptors turn on the soldiers while the Indominus escapes. Owen finds Charlie and she seems to recognize him, but she is killed by a rocket. The soldiers flee and Barry hides in a log while Blue attempts to eat him, but Owen distracts her and she chases after him as he leaves on his motorbike.

Claire, Zach, and Gray are waiting in a Veterinary vehicle when a soldier appears and is killed by a Velociraptor while trying to open the back doors. Another Velociraptor attacks Claire through the window of the truck but falls out, and Zach and Gray manage to electrocute another raptor when it jumps into the truck. Owen reappears and they head back to the resort while the raptors follow their new alpha.

The four humans find Hoskins in the genetics lab attempting to evacuate himself from the facility. He explains how he secretly manipulated the Masrani company to create the Indominus so that, at a fraction of the size, it would be used as a military weapon instead of a stationary park attraction. Delta suddenly appears and corners Hoskins. Hoskins tries to calm her but to no avail, and she eats him instead. The four escape the Innovation center, but end up cornered outside by the three raptors. Owen manages to reestablish his connection with them and when the I. rex arrives, Owen and the raptors attack her, although the raptors are all seemingly killed. Realizing they do not have the "teeth" to defeat the powerful hybrid, they resort to one final option: Claire calls Lowery and tells him to open the T. rex's paddock, luring Rexy, the park's old veteran Tyrannosaurus rex into a fight with the Indominus. She has the upper hand for a moment, but then she is overpowered, and thrown to the ground. However, before the Indominus can kill her, Blue, who's still alive from being knocked into a wall, attacks the Indominus, giving Rexy time to wake up. The Indominus rex, who has no chance to fight back, flails wildly. Then out of nowhere, Rexy gets back up from the ground and chomps onto her neck. Rexy and Blue battle the Indominus, cornering her in front of the Mosasaurus Lagoon. Just as the Indominus recovers, the Mosasaurus bursts out of the water and drags the hybrid underwater where the marine reptile finishes her in a spectacular fashion. Blue and Rexy exchange a respectable look, then head off into the night. The group make their way to the visitor area of the park; Zach and Gray are reunited with their parents, while Owen and Claire leave together.

On the now-abandoned Isla Nublar, Rexy walks up to the helipad, surveys the destruction, looks out over the park, and lets out a powerful, bellowing roar, claiming the island as hers once again.

List of Dinosaurs and Prehistoric Creatures in the Film

Jurassic World was shot on the island Oahu and New Orleans. The filming ended at August 5, 2014. 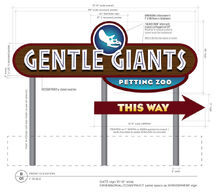 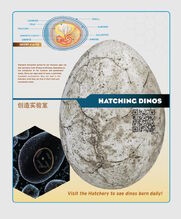 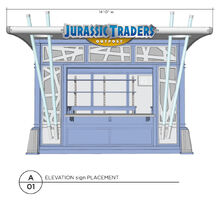 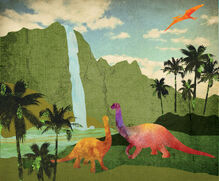 Retrieved from "https://dinopedia.fandom.com/wiki/Jurassic_World?oldid=141673"
Community content is available under CC-BY-SA unless otherwise noted.