Jeholosaurus is an extinct genus of ornithischian dinosaur from the Early Cretaceous Period. It is thought to have been a herbivorous small ornithopod

The first two Jeholosaurus specimens were found in 2000 at Lujiatun nearBeipiao City, Liaoning Province, China, and named and described the same year by Xu Xing, Wang Xioalin and You Hailu. The type and only known species is Jeholosaurus shangyuanensis. The generic name Jeholosaurus means "lizard from Jehol"; Jehol is the name of a historical province situated in westernLiaoning and northern Hebei. Thespecific name refers to the geographical area of Shangyuan where the fossil site is located.[1]

The type specimen of Jeholosaurus, on which the genus is based, isIVPP V 12529. It was found in a layer of the early Yixian Formation, dating from the early Aptian, about a 125 million years old. The layers consist of fluvial sandstone interspersed with tuff and it is thought that an enormous volcanic eruption occurred burying everything within a fifty to sixty mile radius. The holotype contains a compressed skull and a partial postcranial skeleton. The second specimen, IVPP V 12530, was referred to the species. It consists of a better preserved, perhaps smaller, skull and some neck vertebrae.[1] Both specimens represent juvenile or at least subadult individuals.[2]

Both skulls are incomplete and had to be partially restored. The referred specimens shows an extremely large orbit compared to the skull size, with a length of 40% of the total skull length. Its snout is short, also comprising 40% of the skull length. Both traits are indicative of a juvenile individual.

The premaxilla has six teeth and themaxilla has at least thirteen teeth. Although the back, maxillary, teeth are fan-shaped like those of a plant eater, the front premaxillary teeth are narrower and longer, more like a carnivorous dinosaur. This may mean thatJeholosaurus was omnivorous, eating both plants and animals. The deeply inset ventral margin in the maxilla suggests fleshy cheeks may have been present. The nasals have large foraminadorsolaterally and a midline fossa. Nopalpebrae are preserved. Thoughcervical vertebrae and caudal vertebraehave been preserved, their exact number is unknown. The femur is bowed and has an anterior trochanterslightly lower than the greater trochanter and a third as narrow as the latter. They are separated by a shallow cleft. Between the condyles of the lower femur the (anterior) extensor groove is absent. The fourth trochanter is pendant and located in a rather high position. The foot has four metatarsals. The longest is metatarsal III with a length of 5.5 centimetres (2.2 in); it is placed more anteriorly than the other metatarsals. Metatarsal I is more posterior and its upper part is transversely reduced to a splint.[1]

Some distinguishing traits ofJeholosaurus include: enlarged laterodorsal nasal foramina; aquadratojugal fenestra more than 25% maximum quadratojugal length; a quadratojugal less than 30% of skull height; a predentary with almost 150% of premaxillary body length; a dentary extending posteriorly almost to the posterior border of the angular; and the claw of the third toe being longer than the other third toe phalanges.[1] small ornithopod, probably a basal member of the Euornithopoda. 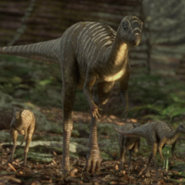 Add a photo to this gallery
Retrieved from "https://dinopedia.fandom.com/wiki/Jeholosaurus?oldid=205684"
Community content is available under CC-BY-SA unless otherwise noted.