Inostrancevia (after the Russian geologist Aleksandr Inostrantsev) is the largest of the gorgonopsid species as it was, likely, the top of the food chain in Russia during the end of the Permian period. It preyed on a large herbivores like the pareiasaur Scutosaurus. The species name I. alexandri is known from an almost complete skeleton.

Like all other gorgonopsids, Inostrancevia was a quadrupedal animal with an upright gait. It was up to 4.3 metres (14 feet) long, the size of a large grizzly bear. It is also known from its two huge sabre teeth, up to 12 cm long and are one of the perfect tools to kill prey. Its other teeth included 6 large incisors, and 10 smaller back teeth and the mandibles that contained 14 incisors, in which 8 of them are smaller than the others. It was one of the largest carnivores of the Permian and would have filled the ecological niche that big cats fill today like the Tiger and Jaguars. It would have also been different from those cats because it would live in the type of environment that lions live in (only far more harsh) but it would have acted like a massive Tiger in that it would have hunted alone. Inostrancevia would have been an extremely fast runner over long distances.

It would have been very territorial in that other predators or Inostrancevia were never welcome similar to today's large carnivores. Its hunting method would have been to lie in wait for an unsuspecting prey item then it would have bound after the creature using its speed to run down the animal then bite the neck until it dies of blood loss or suffocated or both. Then it would have eaten as much as it could. Due to its extremely harsh and arid environment, It would have been a dull colour like grey or brown to blend in to the environment so it could sneak up on its prey.

Inostrancevia uralensis
Add a photo to this gallery 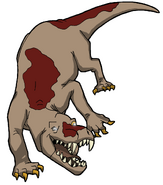 Retrieved from "https://dinopedia.fandom.com/wiki/Inostrancevia?oldid=195273"
Community content is available under CC-BY-SA unless otherwise noted.