Ingentia (meaning: the first giant) is a genus of sauropodomorph dinosaur. Described in July 2018, it has completely changed palaeontologists' understanding of when gigantism in dinosaur species first evolved. The discovery of this genus, confirmed the thesis that the larger species of prosauropod dinosaurs have evolved in the early to the late Triassic.

The type species Ingetia prima; named by Apaldetti; 2018,the name meaning "the first to be huge" in Latin language. Ingentia estimated to grew up as much as nine tonnes in weight, making it the largest known prosauropod ever; and the biggest dinosaur in the entire Triassic period; three times bigger than the previous largest genus. Length estimates are between 26 to 33 feet (7.9 - 10 meters). The species had a herbivorous diet like all known species of the sauropodomorpha; and it was, presumably, able to stand between its hind legs for a short period of time similiar to its cousin species, Plateosaurus.

Ingentia prima lived during the late Triassic, from about 205 million to 210 million years ago, in what is now Argentina. Note its avian-like respiratory system that has cervical air sacs (green) and its lungs (brown). 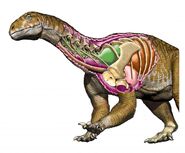 Add a photo to this gallery
Retrieved from "https://dinopedia.fandom.com/wiki/Ingentia?oldid=135927"
Community content is available under CC-BY-SA unless otherwise noted.