Hyaenodon (Hyaena tooth) is an extinct genus of Hyaenodonts, a group of carnivorous creodonts of the family Hyaenodontidae endemic to all continents except South America, Australia and Antarctica, which first evolved 42 million years ago and then suddenly became extinct 15.9 million years ago, existing for approximately 26.1 million years.

The average weight of adult or sub-adult H. horridus, the largest North American species, is estimated to be about 40 kg (88 lb) and may not have exceeded 60 kg (130 lb). H. gigas, the largest Hyaenodon species was much larger, being 120 kg (265 lb) and around 2.5 m (8 ft) long including the tail. H. crucians from the early Oligocene of North America is estimated to be only 10–25 kg ( 22-55 lb). H. microdon and H. mustelinus from the Late Eocene of North America were even smaller and probably weighed about 5 kg (11 lb).

They are fast and vicious dogs with jaws full of teeth, massive heads and short brains. Despite the name, there is no relation what so ever between Hyaenodons and Hyaenas. Other predators that these carnivores competed food with were the Entelodonts. By 1993, 42 species had been distinguished.

H. gigas was a genus of the family Hyaenodontidae from the middle Eocene-early Miocene of Europe, Asia and North America. Members of the genus differ considerably in size and occupied various niches of terrestrial predators. The earliest known H. gigas found in Asia and dating to the late. During the second half of the Eocene epoch, it settled across the northern hemisphere, often occupying released Endangered Oxyaenids of the ecological niches. They have become quite common in much of Asia, North America and Europe, but Africa somehow passed. It may seem that it outwardly resembled several modern members of the family of the caninae, although in reality they are far from their peers. This race is much more united in a variety of animals who have held a variety of niches with predators of the land.

The largest of the genus, for example, Hyaenodon gigas, (the size did not yield the largest of lions and tigers), and the length of the head reaches 50 cm or more. It supported a heavy head which is rather short and had a very strong neck, which was needed to keep caught up with its teeth and break out the victim. Their prey, like the modern dogs, were grabbed by a toothy mouth (and not as a cat, like claws and teeth).

The larger members of the genus are relatively long and have slender limbs, based on several fossils in the parts of the fingers, and apparently adapted to the active movement on hard ground. With moving the hind limbs, this species of Hyaenodon could make sharp throws for prey, and the front may have been needed to cope with food until it got to fall.

It is very likely that these predators were digging with its front paws on the ground, looking for small animals that live in burrows or holes which arranged themselves.

With a rather massive addition, H. gigas probably would not have been able to do a long run. Rather, they were ambush predators, briefly, but actively pursuing prey, so does about most of today's large and small cats. There is no doubt that H. gigas was able to catch, throw and cut a relatively large animal with its powerful hunting abilities including sharp canine teeth for biting the victims neck after leaping onto it and pushing it onto the ground. 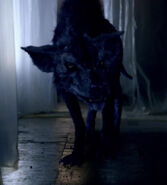 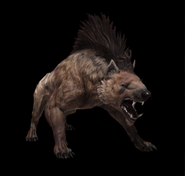 Add a photo to this gallery
Retrieved from "https://dinopedia.fandom.com/wiki/Hyaenodon?oldid=134608"
Community content is available under CC-BY-SA unless otherwise noted.