Homotherium is a type of Machairodontia scimitar tooth that lived 5 million years to 10,000 years ago during the Early Pliocene. It's diet is juveline columbian mammoth, woolly rhino, megaloceros, macrauchenia, and early humans. Its name means same beast because when scientist first discovered Homotherium it looked more like a Smilodon and it is thought to be a sabre tooth. We now know that Homotherium was actually related to a leopard. [1]

The name Homotherium (Greek: ὁμός (homos, 'same') and θηρίον (therion, 'beast') was proposed by Fabrini (1890), without further explanation, for a new subgenus of Machairodus, whose main distinguishing feature was the presence of a large diastema between the two inferior premolars

Homotherium probably derived from Machairodus and appeared for the first time at the Miocene-Pliocene border, about 5 million years ago. During the Pleistocene it occurred in vast parts of Eurasia, North America and until the middle Pleistocene (about 1.5 million years ago) even in Africa. A fossil of H. crenatidens was inadvertently dredged from the bed of the North Sea, which was a flat, low-lying extent of marshy tundra laced with rivers during the recent glaciation. [2] There has also been a discovery of 1.8 million-year-old fossils in Venezuela, indicating that scimitar cats were able to invade South America along with Smilodon during the Great American Interchange. [3] These remains form the holotype of Homotherium venezuelensis. How long they lasted in South America is not yet evident. Homotherium survived in Eurasia until about 28,000 years ago.

Several species (H. nestianus, H. sainzelli, H. crenatidens, H. nihowanensis, H. ultimum) are recognized from Eurasia, which differ mainly in the shape of the canines and in body size; however, given the fluctuation range of the size of modern large cats, it is highly probable that all belong to one species, Homotherium latidens.

Two species described from early Pleistocene Africa, H. ethiopicum and H. hadarensis – also hardly differ from the Eurasian forms. On the African continent the genus disappeared about 1.5 million years ago. In North America a very similar species, H. serum, occurred from the late Pliocene until the late Pleistocene. Remains have been found at various sites between Alaska and Texas. In the southern parts of its range the American Homotherium co-existed with Smilodon; in the northern parts it was the only species of saber-toothed cat. The American Homotherium was originally described by the name Dinobastis.

Despite Homotherium's vast range and the large quantity of fossil remains from Eurasia, Africa and North America, complete skeletons of this cat are relatively rare. One of the most famous sites of Homotherium remains is Friesenhahn cave in Texas, where 30 Homotherium skeletons were found, along with hundreds of juvenile mammoths and several dire wolves.

Homotherium reached 1.1 meters (3.6 feet) at the shoulder and weighed an estimated 190 kilograms (420 lbs) and was therefore about the size of a male African lion. Compared to some other machairodonts, like Smilodon or Megantereon, Homotherium had shorter upper canines, but they were flat, serrated and longer than those of any living cat. Incisors and lower canines formed a powerful puncturing and gripping device. Among living cats, only the tiger (Panthera tigris) has such large incisors, which aid in lifting and carrying prey. The molars of Homotherium were rather weak and not adapted for bone crushing. The skull was longer than in Smilodon and had a well-developed crest, where muscles were attached to power the lower jaw. This jaw had down-turned forward flanges to protect the scimitars. Its large canine teeth were crenulated and designed for slashing rather than purely stabbing.

It had the general appearance of a cat, but some of its physical characteristics are rather unusual for a large cat. The limb proportions of Homotherium gave it a hyena-like appearance. The forelegs were elongated, while the hind quarters were rather squat with feet perhaps partially plantigrade, causing the back to slope towards the short tail. Features of the hind limbs indicate that this cat was moderately capable of leaping. The pelvic region, including the sacral vertebrae, was bear-like, as was the short tail composed of 13 vertebrae—about half the number of long-tailed cats.

The unusually large, square nasal opening, like that of the cheetah (Acinonyx jubatus), presumably allowed quicker oxygen intake, which aided in rapid running and in cooling the brain. As in the cheetah, too, the brain's visual cortex was large and complex, emphasizing the scimitar cat's ability to see well and function in the day, rather than the night as do most other cats.

Based on Homotherium's preference for open habitat such as plains and comparisons with modern cats, it is considered likely by ethologist William Allen et al that Homotherium would have been plainly colored like lions to better camouflage itself.

The decline of Homotherium could be a result of the disappearance of large herbivorous mammals like mammoths in America at the end of the Pleistocene. In North America fossil remains of Homotherium are less abundant than those of its contemporary Smilodon. For the most part it probably inhabited higher latitudes and altitudes and therefore was likely to be well adapted to the colder conditions of the mammoth steppe environment. Reduced claws, relatively slender limbs and the sloping back indicate adaptations for endurance running in open habitats.[18] African species of Homotherium also seem to have hunted early Pleistocene species of Deinotherium, likely targeting the adolescents or calves in a herd. Due to its saber-teeth, the attack of such thick-skinned prey would have been relatively easier and much quicker a kill, as opposed to a similar hunt on modern elephants by lions, which take significantly longer than machairodonts to bring down such large targets.[19] At the famous site that is Friesenhahn Cave, Texas, the remains of almost 400 juvenile mammoths were discovered along with skeletons of numerous Homotherium including adults, elderly animals and cubs. Homotherium groups have been, based on this fossil site, suggested to have specialized in hunting young mammoths and to have dragged the kills into secluded caves to eat out of the open. Homotherium also seemed to have retained excellent nocturnal vision like most cats, and hunting at night in the arctic regions where many Homotherium have been found would probably have been a prime hunting method.[20] The sloped back and powerful lumbar section of Homotherium's vertebrae suggested a bear-like build, so it might have been capable of pulling heavy weight, and the potential risk breaking canines, a fate suffered by other machairodonts such as Machairodus and Smilodon with some frequency due to struggling with prey, is not seen in Homotherium. Moreover, the bones of the young mammoths found in Friesenhahn Cave show distinctive marks matching the incisors of Homotherium, indicating they could efficiently process most of the meat on a carcass and strip flesh from bone in a manner leaving noticeable score marks, indicating it was they and not scavengers who dragged the carcasses into the caves as has been suggested in the past. Examination of the bones also indicates that the carcasses of these juvenile mammoths were dismembered after being killed by the cats before being dragged away, indicating that Homotherium would disarticulate their kill to transport it to a safe area such as a hidden lair or den and prevent scavengers such as dire wolves and American lions from claiming a hard-won meal. Evidence also shows the cats were able to effectively strip flesh from bone in a manner that left noticeable score marks. 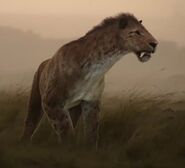 Homotherium size comparison
Add a photo to this gallery

Retrieved from "https://dinopedia.fandom.com/wiki/Homotherium?oldid=138215"
Community content is available under CC-BY-SA unless otherwise noted.