Hipparion was a prehistoric predecessor of the modern horses. Its habitat or biome was be that of non-forested, grassy plains, shortgrass prairie or steppes. Along with Hippidion and Merychippus, Hipparion was one of the most successful prehistoric horses of the Miocene epoch, evolving in North America about 20 million years ago and spreading as far afield as Africa and eastern Asia. To the untrained eye, Hipparion would have appeared almost identical to the modern horse (genus name Equus), with the exception of the two vestigial toes surrounding the single hooves on each of its feet. Judging from its preserved footprints, Hipparion probably ran much like a modern thoroughbred, though it likely wasn't quite as fast. 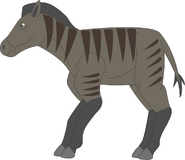 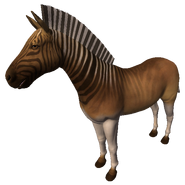 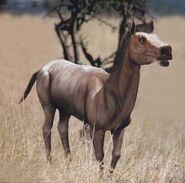 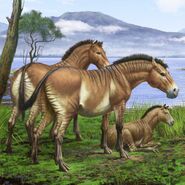 Add a photo to this gallery
Retrieved from "https://dinopedia.fandom.com/wiki/Hipparion?oldid=139163"
Community content is available under CC-BY-SA unless otherwise noted.