Hatzegopteryx is a genus of azhdarchid pterosaur, known from incomplete remains found in Transylvania. The skull fragments, left humerus, and other fossilised remains indicate it was the largest pterosaur. The skeleton of Hatzegopteryx has been considered identical to the known remains of Quetzalcoatlus northropi. Q. northropi has not yet been properly described, and if it is not a nomen dubium, Hatzegopteryx is possibly its junior synonym. It may be the biggest animal ever to fly.

The authors estimated the size of Hatzegopteryx by comparing the humerus fragment, 236 mm (9.3 inches) long, with that of Quetzalcoatlus, of which specimen TMM 41450-3 has a 544 mm (1 feet 9.4 in) long humerus. Observing that the Hatzegopteryx fragment presented less than half of the original bone, they established that it could possibly have been "slightly longer" than that of Quetzalcoatlus. They noted that the wing span of the latter had in 1981 been estimated at eleven to twelve metres, while earlier estimates had strongly exceeded this at fifteen to twenty three metres. From this they concluded that an estimate of a twelve meter wing span for Hatzegopteryx was conservative "if its humerus was indeed somewhat longer than that of Q. northropi". In 2003 they moderated the estimates to a close to twelve meters wing span and an over 2.5 meters (8 feet 2 inches) skull length. 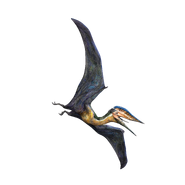 Add a photo to this gallery
Retrieved from "https://dinopedia.fandom.com/wiki/Hatzegopteryx?oldid=157688"
Community content is available under CC-BY-SA unless otherwise noted.