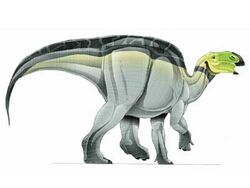 Hadrosaurus (sturdy lizard) is a valid genus of hadrosaurid dinosaur. In 1858, the only known skeleton was discovered, representing the first dinosaur species known from more than isolated teeth to be identified in North America. In 1868, it became the first ever mounted dinosaur skeleton. Hadrosaurus foulkii is the only species in this genus and has been the official state dinosaur of New Jersey, United States since 1991.

Hadrosaurus lived in what is now North America, in the late Cretaceous period. It eat plants. It was likely bipedal for the purposes of running, but could use its forelegs to support itself while feeding—like all hadrosaurids, Hadrosaurus was herbivorous.

In 1838, John Estaugh Hopkins was digging in a marl pit (on a small tributary of the Cooper River in Haddonfield, New Jersey, and part of the Campanian-age Woodbury Formation) when he uncovered large bones, putting them on display at his home, also in Haddonfield. In 1858 these bones sparked the interest of a visitor, William Parker Foulke. The skeleton was dug out from the marl pit in 1858 by Foulke. The excavation site, known as the Hadrosaurus Foulkii Leidy Site, is now a National Historic Landmark. Foulke contacted paleontologist Joseph Leidy, and together they recovered an almost complete set of limbs, along with a pelvis, several part of the feet, twenty-eight vertebrae (including eighteen from the tail), eight teeth and two small parts of the jaw. Foulke and Leidy studied the fossils together, and in 1858 Leidy formally described and named Hadrosaurus foulkii in honor of his collaborator.

Leidy recognized that these bones were from a dinosaur by their similarity to those of Iguanodon, discovered in England some decades before, but the skeleton of Hadrosaurus was far more complete. Leidy's monograph Cretaceous Reptiles of the United States, describing Hadrosaurus more completely and with illustrations, was written in 1860 but the American Civil War delayed its publication until 1865. Leidy reconstructed Hadrosaurus as a biped, in contrast to the view at the time that such dinosaurs were quadrupedal. The entire skeleton was completely assembled in 1868 by a team including English sculptor and naturalist Benjamin Waterhouse Hawkins and was put on display at Philadelphia Academy of Natural Sciences. The skeleton is usually kept 'behind-the-scenes' in the Academy's collections. However, from November 22, 2008 until April 19, 2009, a fully assembled cast of the skeleton and an exhibit about the science and culture surrounding the dinosaur's discovery was open to the public.

Despite the fact that the family Hadrosauridae has Hadrosaurus as its type genus, the skeleton lacks a skull and is too incomplete to compare to other hadrosaurines for classification purposes, leading most scientists to consider it a nomen dubium, or dubious name. When the skeleton was first assembled, it was displayed with a plaster skull sculpted by Hawkins. Many other artists have recreated Hadrosaurus with skulls from other, related species such as Gryposaurus and Brachylophosaurus. A statue of Hadrosaurus, sculpted by Haddonfield resident John Giannotti, now stands in the center of the town of Haddonfield, commemorating its discovery there.

Retrieved from "https://dinopedia.fandom.com/wiki/Hadrosaurus?oldid=202604"
Community content is available under CC-BY-SA unless otherwise noted.