Gorgonopsia ("gorgon face") is a suborder of therapsids. Like other therapsids, gorgonopsians were at one time called "mammal-like reptiles". Their mammalian specializations include differentiated (heterodont) tooth shape, a fully developed temporal fenestra, pillar-like rear legs, and ear bones. Gorgonopsians are a part of a group of therapsids called theriodonts, which includes mammals. They were among the largest carnivores of the late Permian. The largest known, Inostrancevia, was the size of a large bear with a 45 cm long skull, and 12-cm long saber-like teeth (clearly an adaptation to being a carnivore). It is unknown whether they had fur, scales, or naked skin. Gorgonopsids do not have a lot of media attention, only being in the BBC documentary Walking With Monsters.

Gorgonopsids (Gorgonopsia) are theriodonts, a major group of therapsids that included the ancestors of mammals. Gorgonopsians evolved in the Middle Permian, from a reptile-like therapsid that also lived in that period. The early gorgonopsians were small, being no larger than a dog. The extinction of dinocephalians (who dominated the Middle Permian world) led the gorgonopsians to be the dominant predators of the Late Permian. Some had approached the size of a rhinoceros, such as Inostrancevia, the largest of the gorgonopsians. A nearly complete fossil of Rubidgea has been found in South Africa. The Gorgonopsia became extinct at the end of the Permian period, being the only theriodont line to be terminated by this mass extinction.

The gorgonopsids are one of the three groups of theriodonts (the other two were the therocephalians, and the cynodonts). Theriodonts are related to the herbivorous Anomodontia. Gorgonopsia includes three subfamilies, the Gorgonopsinae, Rubidgeinae and Inostranceviinae, plus a larger number of genera that have not been placed in any of these groups. A total of 28 genera and 41 species, with the genera described most completely being Dinogorgon, Inostrancevia and Rubidgea. The most comprehensive review of the group is by Sigogneau-Russell, 1989. However, there has not been a detailed cladistic assessment of the phylogeny of these animals.

Scylacognathus was first named by Broom in 1913, and contains four species, S. grimbeeki, S. major, S. parvus, and S. robustus. The formula for its upper jaw is I5, CI, PC5.

Aloposaurus was first named by Broom in 1910, and contains two species, A. gracilis and an undefined Aloposaurus specimen.

Arctognathus (meaning "bear jaw") is an extinct genus of gorgonopsid that thrived during the Late Permian. A carnivore, like all gorgonopsid, Arctognathus was given its name ("Bear jaw") in reference to its short and rounded snout. There are two recognized species: A. curvimola and A. breviceps; and two unrecognized species: A. cookei and A. nasuta. Its type locality is the Karoo basin covering large parts of South Africa.

Arctops (meaning "bear face") was found in South Africa, from the Late Permian. Its skull was 30 cm (1 ft) long. It perished during or before the P-T Extintion event. 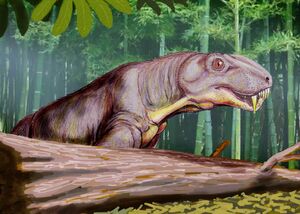 Broomisaurus (meaning "Broom's lizard") is an extinct gorgonopsid genus. It was first named by Broom in 1913, and contains two species, B. planiceps and B. rubidgei. 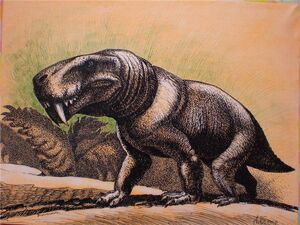 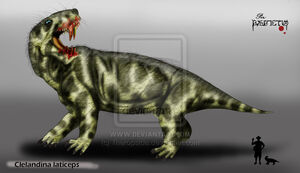 Cyonosaurus lived in the late Permian period of South Africa. There are five species in this genera: C. longiceps (Olson, 1937), C. kitchingi, C. broomianus,C. rubidgei, and C. tenuirostris. It was 0.6 to 1.1 meters in length, with a skull 9 to 18 centimeters in length.

Dinogorgon (meaning "terrible dragon") was a gorgonopsid that lived in the Late Permian period of South Africa. Dinogorgon was a predator that ate reptiles and smaller therapsids. Its closest relatives included Lycaenops, and possibly Gorgonops. Like all other gorgonopsids, Dinogorgon perished prior to, or during the Permian-Triassic Extinction Event.

Eoarctops (meaning "early bear face") is an extinct gorgonopsid genus. It was first named by Haughton in 1929, and contains one species, E. vanderbyli and an undefined Eoarctops specimen. The jaw of an Eoarctops shows four or five upper incisors, a canine, and three molars in the same margin.

Leontocephalus (meaning "lion-toothed head") was first named by Broom in 1940, and contains four species, L. cadlei, L. haughtoni, L. intactus, and L. rubidgei. Due to the wear facets on the skull of Leontocephalus, it was capable of opening its jaws to a full 90 degrees, in order to separate its large canine teeth before biting into its prey. 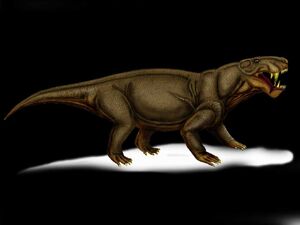 Lycaenops (meaning "Wolf-Face") is a genus of carnivorous therapsid (mammal-like reptile). It measured about 1 meter (3 feet) long and lived during the late mid-Permian to the early Late Permian in what is now South Africa. Like the modern-day wolves from which it takes its name, Lycaenops had a long and slender skull, with a set of dog-like fangs set into both its upper and lower jaws. These pointed canine teeth were ideal for the use of stabbing and/or tearing at the flesh of any large prey that it came upon. Lycaenops most likely hunted small vertebrates such as reptiles, small pelycosaurs, and dicynodonts such as Robertia and Cistecephalus. Lycaenops walked and ran with its long legs held close to its body. This is a feature found in mammals, but not in more primitive amniotes and synapsids, such as the pelycosaurs and early reptiles, whose legs are positioned to the sides of their bodies. The ability to move like a mammal would have given Lycaenops an advantage over other land vertebrates, since it would have been able to out-run them.

Sycosaurus was first named by Haughton in 1924, and contains five species, S. brodiei, S. intactus, S. kingoriensis, S. laticeps, and S. vanderhorsti. Sycosaurus's skull is about medium size for a Gorgonopsid. It has a dental formula of i5, c1, pc5. Sycosaurus is referenced in Chapter three in the RPG game E.V.O.: Search for Eden Shrine, in the domain of the prime frogs. 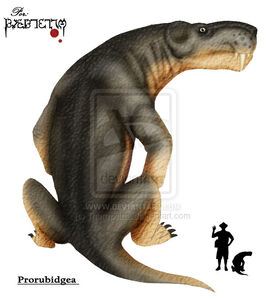 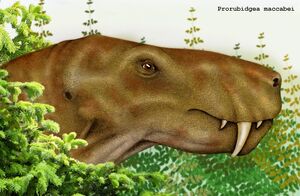 Rubidgea atrox lived in the Permian period. It had very large canines, longer than the teeth of the dinosaur Tyrannosaurus rex. Rubidgea atrox reached a length of 2.4 metres (7.9 ft) and had a 46 centimetres (1.51 ft) long skull.

Scylacops was a moderately-sized gorgonopsid. It was first named by Broom in 1913, and contains two species, S. bigendens, and S. capensis. Its fossils have been found in South Africa. It is believed to be closely related to the Gorgonopsian Sauroctonus progressus.

Sauroctonus was a large (3 m. long) gorgonopsid that lived in the Late Permian epoch before the Permian-Triassic extinction event that wiped out many life forms on Earth (250 million years ago). Its fossils have been found in South Africa and the Volga basin of Russia. Sauroctonus's flattened, triangular skull was about 25 centimeters long, with a parietal eye, a primitive character, on the crown. The upper and lower jaw each contained one pair of massive canines (the upper pair was larger); the other teeth were smaller, but were also sharp and pointed. In addition, minute, blunt teeth were present on the palatine bones. The lower jaw was widened to form a kind of chin. The long, lightly built, five-toed limbs bore a resemblance to mammals' limbs, but despite its 'mammalian' characteristics, Sauroctonus was not one of the ancestors of mammals.

In The Popular Culture

Gorgonops (Known as Gorgonopsid) from Walking With Monsters TV Series.