Gomphotherium, meaning "welded beast", is an extinct genus of proboscidean which evolved in the early Miocene of North America from 13.65 to 3.6 million years ago, existing for about 10 million years. The genus emigrated into Asia, Europe and Africa after a drop in sea level (probably during the Tortonian stage of the Miocene) allowed them to cross over. It survived into the Pliocene, and its remains have been found in Chile, France, Germany, Austria, Kansas, Tennessee, Pakistan and Kenya.

Gomphotherium stood around 3 metres (9.8 ft) high, and bore a strong resemblance to a modern elephant. However, it had four tusks; two on the upper jaw and two on the elongated lower jaw. The lower tusks are parallel and shaped like a shovel and were probably used as such. Unlike modern elephants, the upper tusks were covered by a layer of enamel.

Compared to elephants, the skull was more elongated and low, indicating that the animal had a short trunk, rather like a tapir's. These animals probably lived in swamps or near lakes, using their tusks to dig or scrape up aquatic vegetation. In comparison to earlier proboscids, Gomphotherium had far fewer molars; the remaining ones had high ridges to expand their grinding surface. Gomphotherium inhabited dry wooded regions near lakes. A complete skeleton of Gomphotherium has been found at Muhldorf, Germany, in 1971. With its shovel-toothed lower tusks which were used for scooping up vegetation from flooded swamps and lakebeds Gomphotherium set the pattern for the later shovel-toothed elephant Amebelodon, which had an even more pronounced digging apparatus. For a prehistoric elephant of the Miocene and Pliocene epochs, Gomphotherium was remarkably widespread, taking advantage of various land bridges to colonize Africa and Eurasia from its original stomping grounds in North America. 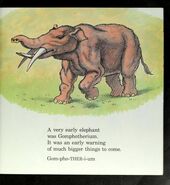 Add a photo to this gallery
Retrieved from "https://dinopedia.fandom.com/wiki/Gomphotherium?oldid=198522"
Community content is available under CC-BY-SA unless otherwise noted.