Glacialisaurus is a genus of early sauropodomorph dinosaur from the early Jurassic Hanson Formation of Antarctica. First described by Nathan Smith and Diego Pol in 2007, the type species, G. hammeri, is known only from a partial fossilized hind limb and foot. In their phylogenetic analysis of the relationships of Glacialisaurus, Smith and Pol found that it was a non-eusauropod sauropodomorph more advanced than other forms such as Saturnalia and Plateosaurus. Features of its foot are similar to Lufengosaurus (from the Early Jurassic of China), and the phylogenetic study suggests that Lufengosaurus may have been a close relative of Glacialisaurus. The discovery of Glacialisaurus is important to the study of the early distribution of sauropod dinosaurs. The presence of this primitive sauropodomorph in the Hanson Formation (which has also yielded remains attributed to true sauropods) shows that both primitive and advanced members of this lineage existed side by side in the early Jurassic Period.

The name Glacialisaurus is derived from the Latin word glacialis, meaning “icy” or “frozen”, in reference to the Beardmore Glacier region in the Central Transantarctic Mountains, where the fossil remains were found. The type species, G. hammeri, was named for Dr. William R. Hammer of Augustana College, who made major contributions to both paleontology and Antarctic research.

Glacialisaurus skeleton in the Museum of Natural History of Los Angeles County.

Glacialisaurus models in the Museum of Natural History of Los Angeles County. 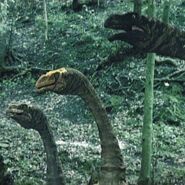 Add a photo to this gallery
Retrieved from "https://dinopedia.fandom.com/wiki/Glacialisaurus?oldid=205301"
Community content is available under CC-BY-SA unless otherwise noted.