Giraffatitan was a sauropod dinosaur that lived during the late Jurassic Period. It ate 880 lbs of plant food per day. It was originally named as an African species of Brachiosaurus (B. brancai) because of their similar appearance. The Giraffatitan is one of the largest animals known ever to have walked the earth. The only discovered species is called Giraffatitan brancai.

Giraffatitan was a sauropod, one of a group of four-legged, plant-eating dinosaurs with long necks and tails and relatively small brains. It had a giraffe-like build, with long forelimbs and a very long neck. The skull had a tall arch anterior to the eyes, consisting of the bony nares, a number of other openings, and large teeth. Traditionally, the distinctive high-crested skull has been seen as a characteristic of the Brachiosaurus to which Giraffatitan brancai was originally referred, but because within the traditional Brachiosaurus material it is known only from Tanzanian specimens now assigned to Giraffatitan, it is possible that Brachiosaurus altithorax did not show this feature. For many decades, Giraffatitan was claimed to be the largest dinosaur known, but in the later part of the 20th century several giant titanosaurians (Argentinosaurus, Puertasaurus, and Futalognkosaurus) appear to have surpassed Giraffatitan in terms of sheer mass. However, Giraffatitan, along with Brachiosaurus are still the largest dinosaurs known from relatively complete material.

Giraffatitan brancai was first named and described by German paleontologist Werner Janensch in 1914 as Brachiosaurus brancai, based on several specimens recovered between 1909 and 1912 from the Tendaguru formation near Lindi, in what was then German East Africa, today Tanzania. It is known from five partial skeletons, including three skulls and numerous fragmentary remains including skull material, some limb bones, vertebrae and teeth. It lived from 145 to 150 million years ago, during the Kimmeridgian to Tithonian ages of the Late Jurassic period. In 1988, Gregory S. Paul noted that Brachiosaurus brancai showed significant differences from the North American Brachiosaurus, especially in the proportions of its trunk vertebrae and in its more gracile build. Paul used these differences to create a subgenus he named Brachiosaurus (Giraffatitan) brancai. In 1991, George Olshevsky asserted that these differences were enough to place the African brachiosaurid in its own genus, simply Giraffatitan.

Further differences between the African and North American forms came to light with the description in 1998 of a North American Brachiosaurus skull. This skull, which had been found nearly a century earlier (it is the skull Marsh used on his early reconstructions of Brontosaurus), is identified as "Brachiosaurus sp." and may well belong to B. altithorax. The skull is closer to Camarasaurus in some features such as the form of the front teeth and more elongated and less hollowed-out on top than the distinctive short-snouted and high-crested skull of Giraffatitan. The classification of Giraffatitan as a separate genus was not widely followed by other scientists at first, as it was not supported by a rigorous comparison of both species. However, a detailed comparison was published by Michael Taylor in 2009. Taylor showed that "Brachiosaurus" brancai differed from B. altithorax in almost every fossil bone that could be compared, in terms of both size, shape, and proportion, finding that the placement of Giraffatitan in a separate genus was valid.

Giraffatitan's brain measured about 300 centimeters³, which, like those of other sauropods, was small compared to its massive body size. A 2009 study calculated its brain-to-body mass ratio (a rough estimate of possible intelligence) at a low 0.62 or 0.79, depending on the size estimate used. Giraffatitan is also similar to other sauropods in having an enlargement of the spinal cord above the hips, which some older sources misleadingly referred to as a "second brain". The placement of Giraffatitan nostrils has been the source of much debate with Witmer (2001) describing in Science the hypothesized position of the fleshy nostrils in Giraffatitan in as many as five possible locations.

There has also been the hypothesis of various sauropods, such as Giraffatitan, possessing a trunk. The fact that there were no narrow-snouted sauropods (Giraffatitan included) tends to discredit such a hypothesis. Stronger evidence for the absence of a trunk is found in the teeth wear of Giraffatitan, which shows the kind of wear that would result from biting and tearing off of plant matter rather than purely grinding, which would be the result of having already ripped the leaves and branches off with its trunk.

The nostrils of Giraffatitan(like other sauropods, for example the Brachiosaurus, like the huge corresponding nasal openings in its skull, were long thought to be located on the top of the head. In past decades, scientists theorized that the animal used its nostrils like a snorkel, spending most of its time submerged in water in order to support its great mass. The current consensus view, however, is that Giraffatitan was a fully terrestrial animal. Studies have demonstrated that water pressure would have prevented the animal from breathing effectively while submerged and that its feet were too narrow for efficient aquatic use. Furthermore, new studies by Lawrence Witmer (2001) show that, while the nasal openings in the skull were placed high above the eyes, the nostrils would still have been close to the tip of the snout (a study which also lends support to the idea that the tall "crests" of brachiosaurs supported some sort of fleshy resonating chamber). 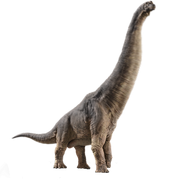 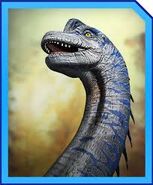 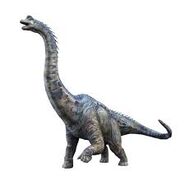