Gillicus was a relatively small, 2-metre (6 feet) long ichthyodectid fish that lived in the Western Interior Seaway, in what is now central North America, during the Late Cretaceous. Like its larger relative, Ichthyodectes, G. arcuatus had numerous small teeth lining its jaws, and ate smaller fish by sucking them into its mouth. Gillicus would also filter feed and were also eaten by their own relative, Xiphactinus. In particular, one 13 feet (4 meters) fossil specimen was collected by George F. Sternberg with another, nearly perfectly preserved 6 feet (1.8 meters) long ichthyodectid Gillicus arcuatus, inside of it. The larger fish apparently died soon after eating its prey, most likely due to the smaller fish prey struggling and rupturing an organ as it was being swallowed. This fossil can be seen at the Sternberg Museum of Natural History in Hays, Kansas. 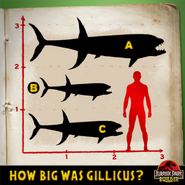 Add a photo to this gallery
Retrieved from "https://dinopedia.fandom.com/wiki/Gillicus?oldid=134740"
Community content is available under CC-BY-SA unless otherwise noted.