Start a Wiki
Gigantophis garstini was a prehistoric snake which may have measured more than 10 meters (33 feet), larger than any living species of snake. It once took the mantle of largest snake before Titanoboa, which was recently discovered in Colombia. Gigantophis lived approximately 40 million years ago in the southern Sahara where Egypt and Algeria are now situated.

Jason Head, of the Smithsonian Institution in Washington, DC, has compared fossil Gigantophis vertebrae to those of the largest modern snakes, and concluded that the extinct snake could grow from 9.3 to 10.7 m (30.5 to 35.1 ft) in length. If 10.7 m (35.1 ft), it would have been more than 10% longer than its largest living relatives.

Later estimates, based on allometric equations scaled from the articular processes of tail vertebrae referred to Gigantophis, revised the length of Gigantophis to 6.9 ± 0.3 metres (22.64 ± 0.98 ft).

The species is known only from a small number of fossils, mostly vertebrae.

Its discovery was published in 1901 by paleontologist Charles William Andrews, who described it, estimated its length to be about 30 feet, and named it garstini in honor of Sir William Garstin, KCMG, the Under Secretary of State for Public Works in Egypt.

Gigantophis is classified as a member of the extinct family Madtsoiidae which contain mostly gondwanian snakes.

Gigantophis fed on pig-sized proboscideans, such as Moeritherium, which were distant cousins of the modern elephants. The giant snake also ate crocodiles and other large reptiles. Gigantophis would largely be an aquatic snake, hiding underwater until it was time to strike. It was a constrictor, like modern day boas and pythons. However it was related to neither of those two snake families, instead it was part of the now extinct genus Madtsoiidae. 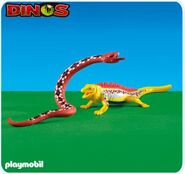 Add a photo to this gallery
Retrieved from "https://dinopedia.fandom.com/wiki/Gigantophis?oldid=157732"
Community content is available under CC-BY-SA unless otherwise noted.