Dinopedia
Register
Don't have an account?
Sign In
Advertisement
in: Prehistoric reptiles of North America, Ornithocheiroids, Fossil taxa described in 1952,
and 32 more

Geosternbergia is an extinct pteranodontid - pterodactyloid pterosaur from the Late Cretaceous geological period of North America. It was one of the largest pterosaur genera and had a wingspan of up to 7.25 meters (23.8 feet).

Geosternbergia was among the largest pterosaurs, with the wingspan of most adults ranging between 3–6 meters (9.8–19.7 feet). No complete skulls of adult males have been found, but a nearly complete lower jaw has been estimated at 1.25 meters (4.1 feet) long. While most specimens are found crushed, enough fossils exist to put together a detailed description of the animal. Geosternbergia sternbergi was very similar to the more well-known pterosaur species Pteranodon longiceps and is often considered simply an earlier species of Pteranodon itself. It is different from Pteranodon mainly due to its earlier time period and broader, more upright crest.

The most distinctive characteristic of Geosternbergia is its cranial crest. These crests consisted of skull bones (frontals) projecting upward and backward from the skull. The size and shape of these crests varied due to a number of factors, including age, gender, and species. Male G. sternbergi, the older species of the two described to date, had a larger vertical crest with a broad forward projection, while G. maysei had a short, rounded vertical crest and was generally smaller. Females of both species were smaller and bore small, rounded crests. The crests were probably mainly display structures, though they may have had other functions as well.

The first G. sternbergi fossil was collected by George F. Sternberg in 1952 and described by John Christian Harksen in 1966, from the lower portion of the Niobrara Formation. It was older than Pteranodon longiceps and is considered by Bennett to be the direct ancestor of that species.

Geosternbergia was traditionally considered a species, or occasionally subgenus, of the similar pterosaur Pteranodon, in most major studies of pteranodontians through the 1990s. However, a 2010 review of the group by A.W.A. Kellner suggested that Pteranodon sternbergi was different enough from P. longiceps to belong in a distinct genus, to which Kellner also referred a new species, Geosternbergia maysei.[3] Earlier, pterosaur researcher Chris Bennett had considered the G. maysei specimen an adult male P. longiceps.

Adult Geosternbergia specimens may be divided into two distinct size classes, small and large, with the large size class being about one and a half times larger than the small, and the small being twice as common as the large. Both size classes lived alongside each other, and while researchers had previously suggested that they represent different species, Christopher Bennett showed that the differences between them are consistent with the concept that they represent females and males, and that Geosternbergia species were sexually dimorphic. Skulls from the larger size class preserve large, upward and backward pointing crests, while the crests of the smaller size class are small and triangular. Some larger skulls also show evidence of a second crest that extended long and low, toward the tip of the beak, which is not seen in smaller specimens.

The gender of the different size classes was determined, not from the skulls, but from the pelvic bones. Contrary to what may be expected, the smaller size class had disproportionately large and wide-set pelvic bones. Bennett interpreted this as indicating a more spacious birth canal, through which eggs would pass. He concluded that the small size class with small, triangular crests represent females, and the larger, large-crested specimens represent males.

Note that the overall size and crest size also corresponds to age. Immature specimens are known from both females and males, and immature males often have small crests similar to adult females. Therefore, it seems that the large crests only developed in males when they reached their large, adult size, making the gender of immature specimens difficult to establish from partial remains.

The fact that females appear to have outnumbered males two to one suggests that, as with modern animals with size-related sexual dimorphism, such as sea lions and other pinnipeds, Geosternbergia might have been polygynous, with a few males competing for association with groups consisting of large numbers of females. Similar to modern pinnipeds, Geosternbergia may have competed to establish territory on rocky, offshore rookeries, with the largest, and largest-crested, males gaining the most territory and having more success mating with females. The crests of male Geosternbergia would not have been used in competition, but rather as "visual dominance-rank symbols", with display rituals taking the place of physical competition with other males. If this hypothesis is correct, it also is likely that male Geosternbergia played little to no part in rearing the young; such a behavior is not found in the males of modern polygynous animals who father many offspring at the same time.

A Geosternbergia Pteranodon in Dinosaur King. 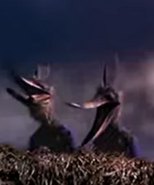 Madonna the Geosternbergia in Prehysteria 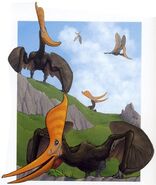 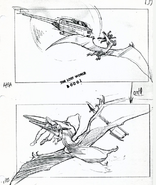 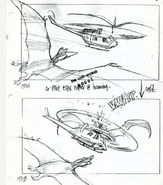 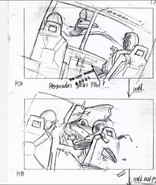 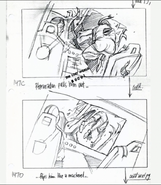 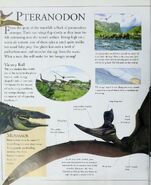