Fostoria (named after Robert Foster who discovered the type locality and bones; the specific name dhimbangunmal means "sheep yard" in the languages of the Yuwaalaraay, Yuwaalayaay, and Gamilaraay peoples of Australia) is a genus of iguanodontian ornithopod dinosaur from the Griman Creek Formation of New South Wales, Australia. The type and only species, Fostoria dhimbangunmal was described in 2019, although the paper describing Fostoria was written in 2018.[1]

In 1984, Bob Foster, an opal miner, discovered a vertebra from an ornithopod in Lightning Ridge. Foster originally interpreted the fossil as a hoof belonging to a horse.[2] Foster eventually found so many fossils in his mine that he showed his finds to paleontologists of the Australian Museum in Sydney. After they had a look at the Fostoria fossils, paleontologist Alexander Ritchie with some army reservists travelled to the mine to excavate more fossils. The fossils were prepared but remained unstudied until 2015.[2] Foster in the early 21st century removed the finds from a private opal museum and exhibited them in, and later donated them to, the Australian Opal Museum in Lightning Ridge, where they remain to this day.[1] 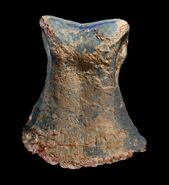 Retrieved from "https://dinopedia.fandom.com/wiki/Fostoria?oldid=128433"
Community content is available under CC-BY-SA unless otherwise noted.