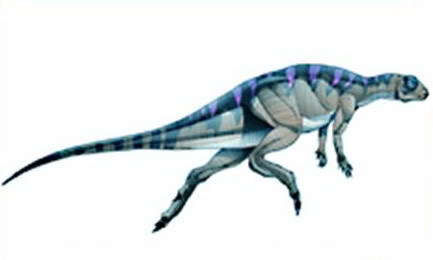 Fabrosaurus (/ˌfæbrɵˈsɔrəs/ fab-ro-sawr-əs; meaning "Fabre's lizard" in honor of Jean Fabre, a French geologist and a colleague of Ginsburg on the expedition that collected the fossil in Basutoland, Southern Africa; Greek sauros "lizard" was a genus of herbivorous dinosaur which lived during the Late Triassic and Early Jurassic (Hettangian to Sinemurian stages 206 - 189 mya). As the only fossil known of it is a partial jawbone with three teeth, Fabrosaurus is a nomen dubium and may in fact be the same as Lesothosaurus.

Fabrosaurus was around 1 meter long (3.3 ft). Little else can be inferred from the scanty remains. It was named by paleontologist Leonard Ginsburg in 1964. The type species, F. australis, is named for the location of the fossils in Lesotho, Southern Africa.

Retrieved from "https://dinopedia.fandom.com/wiki/Fabrosaurus?oldid=158290"
Community content is available under CC-BY-SA unless otherwise noted.