Start a Wiki
Eusmilus ('true sabre') is a prehistoric genus of nimravid that lived in Europe during the Late Eocene to Early Oligocene epochs (37.2—28.4 mya).

There are three valid species of Eusmilus, E. bidentatus, E. gervais, and E. villebramarensis. Ekgmoiteptecela MacDonald, 1963 was synonymized with Eusmilus by some authors, but is actually synonymous with Hoplophoneus.

Eusmilus had a long body and was about as tall as a leopard. It had developed long saber teeth and looked like a saber-toothed cat, but was actually a so-called 'false saber-tooth'. Most were leopard-sized and rather long-bodied and short-legged compared to modern leopards. Some reached 2.5 metres (8 ft) long. Eusmilus had lost many other teeth, possessing only 26 instead of the 44 usually seen in carnivore mammals. Its mouth could open to an angle of 90 degrees, allowing the creature to properly use its saber teeth. Bony flanges projected from Eusmilus ' lower jaw to protect the sabers (this is also seen in the unrelated marsupial Thylacosmilus and felid Megantereon). There is fossil evidence of conflict between Eusmilus and Nimravus, another genus of nimravid.

Eusmilus cubs and adolescents have been discovered, and examinations of their skeletons indicates that their saber-teeth emerged late in life, indicating the animals were dependent on their mothers for a relatively long period. The milk teeth of Eusmilus, upon their eruption, were large enough to allow it to hunt effectively. The added advantage of these milk sabers was that because of the late growth of the permanent sabers, if the milk saber-teeth were damaged, the nimravid had a chance to grow a new set of saber-teeth, allowing it to continue hunting. 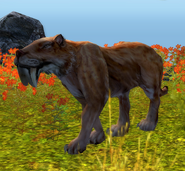 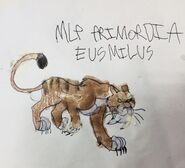 Add a photo to this gallery
Retrieved from "https://dinopedia.fandom.com/wiki/Eusmilus?oldid=143806"
Community content is available under CC-BY-SA unless otherwise noted.