Epicyon (meaning "more than a dog" in greek, its pronounced epp-ih-SIGH-on) is a large extinct canid

genus of the subfamily Borophaginae ("bone-crushing dogs"), native to North America. It lived from the Hemingfordian age of the Early Miocene to the Hemphillian of the Late Miocene (20.6—5.330 Mya. Epicyon existed for about 15.5 million years. It was about 5 feet long, and its weight has been estimated at 150 lbs. Some sources state 200-300 pounds.[1] Epicyon had a massive head and powerful jaws, giving its skull a lionlike shape (rather than that of a wolf). 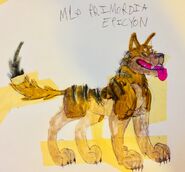 Epicyon species compared to a 1.8 m tall person
Add a photo to this gallery
Retrieved from "https://dinopedia.fandom.com/wiki/Epicyon?oldid=128211"
Community content is available under CC-BY-SA unless otherwise noted.