Eocarcharia (meaning "dawn shark") is a genus of carcharodontosaurid theropod dinosaur that lived in the Sahara 112 million years ago, in what today is the country of Niger. It was discovered in 2000 on an expedition led by University of Chicago paleontologist Paul Sereno. The type and only species is Eocarcharia dinops. Its teeth were shaped like blades and were used for disabling live prey and ripping apart body parts. Eocarcharia’s brow is swollen into a massive band of bone, giving it a menacing glare. It was one of the many gigantic theropod dinosaurs found in the Sahara and among the largest carnivores to ever live on Earth. Eocarcharia was 6–9 meters in length. It ate sauropods such as Nigersaurus taqueti. It is a member of Carcharodontosauridae.[1]

In the Elrhaz Formation, dinosaurs that lived with Eocarcharia include theropods Kryptops and Suchomimus, sauropod Nigersaurus, and ornithopods Ouranosaurus, Lurdusaurus, Elrhazosaurus. 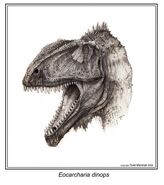 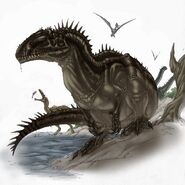 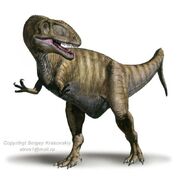 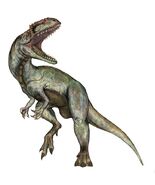 Add a photo to this gallery
Retrieved from "https://dinopedia.fandom.com/wiki/Eocarcharia?oldid=146161"
Community content is available under CC-BY-SA unless otherwise noted.