It is suggested that E. dikikae weighed up to 200 kilograms and grew up to 2 meters in length.[1] The fossils evidence suggests that the E. dikikae was a giant semiaquatic otter and had a jaw structure that suggests it fed on hard foods but this is still undetermined.[1] While related species have also been found in Europe and Asia, the differences in size and dental structures differentiate E. dikikae from its relatives.[2]

Enhydriodon dikikae belongs to the order Carnivora, superfamily Musteloidea, family Mustelidae and subfamily Lutrinae. The closest living relative to this species is the modern otter.[1] Other related animals in the Musteloidea superfamily are from the family, Procyonidae to which animals like racoons, olingos and coatis belong to. There is some debate over whether E. dikikae should belong to the genus Sivaonyx however at this point, it is still classified as being in the genus Enhydriodon.[5]

Fossils of a partial skull which included a snout, orbit, parts of the lower jaw and most of the teeth that belonged to E. dikikae.[6]

According to these fossils, E. dikikae was similar in size to a bear but resembled the modern otter. It is estimated to have weighed 100–200 kg and to be over 2m in body length.[1][7][8] The fossils found in Ethiopiasuggest that the species had a large skull, approximately 25 cm with a short, non-prognathic snout. The dental arch was broad, with long, strong canines grown laterally on the maxilla and large premolars. The limb-bone fossils measured up to 27 cm in length.[1]

Enhydriodon dikikae differs from other species in the genus Enhydriodon in its loss of frontal premolars and a divided lower molar, as well as its overall size.[1] Most of the relatives of E. dikikae are smaller in size.[1]Unlike its Indian relative, Enhydriodon falconeri in the larger points in the crown of its teeth.[1] The dental structures of E. dikikae also differ from its relatives Enhydriodon ekecaman from Kenya,[9] Enhydriodon hendeyifrom South Africa,[10] and the Enhydriodon africanus from Namibia.[1] The E. dikikae is also generally larger in size than the other Enhydriodon species.[1]

The E. dikikae fossils were found in Dikika, Lower Awash, Ethiopia[1] along with aquatic and terrestrial species from that epoch. Carbon and oxygen isotopes of tooth fossils from various other species that existed during the same time as E. dikikae were used to determine the habitat and food resources available in Pliocene Dikika.[11] The isotopic analyses suggested that the landscape of Dikika during this part of the Pliocene was between grassy woodland and open grassland so, habitat resources consisted mostly of woodlands and shrublands, with a shift towards open and arid environments.[11][12] The oxygen isotopes analysis also indicated that the area was in close proximity to a body of water, most likely a freshwater swamp or shallow lake and that there were various drinking water resources.[11]

Studies suggest that there was a decrease in precipitation and increase in temperatures during the Pliocene and the abundance of grassy habitat allowed the fauna to be dominated by terrestrial animals.[12][13][14]However, fossils found in the same research site as E. dikikae and at the same stratigraphical level included aquatic species like fish, crocodiles, and hippopotamuses as well as terrestrial species.[1] Other fossil evidence suggests that E. dikikae coexisted with more than one other Mustelidae species such as the smaller E. ekecaman and Torolutra. It is likely that the difference in size between these species forced them to prey on animals of different sizes and therefore they were not in competition with each other.[5][9]

There is no evidence to explain why E. dikikae went extinct after the Pliocene epoch.[5][9] However, while presenting his findings in New York, Lars Werdelin suggested that the emergence of early hominins may have been a possible cause for the extinction of the large carnivores that existed at the time due to indirect competition.[15] He suggests that hominins may have competed with these animals for habitats, forcing a change in some behaviours like predation behaviours, and subsequently the effect of the early hominins may have forced these carnivores into extinction.[15]

The fossils of E. dikikae had thinner limb bones than aquatic species but weaker than fully terrestrial predators, suggesting aquatic and non-aquatic adaptations. It is likely that the species spent more time on land than in the water[1] unlike their later relative, E. sivalensis that were mostly aquatic and lived under boulders or rocks, in dens or under tree trunks along the banks of streams or lakes.[16]

The structure of the jaw and teeth of E. dikikae were used to determine the possible diet of the species. The large teeth along the cheekbone of the skull indicates that their diet may have consisted of hard food. This is supported by the large size of the crushing parts of the teeth that would have been used to break through their hard food.[1] Due to the large size of E. dikikae, it is unlikely that it would have been able to catch fast-moving prey like fish, however catfish were found in shallow waters during the same period of time and the purpose of the jaw structure could be for crushing the skull of the catfish to prevent E. dikikae from getting hurt. A study suggests that, like their relative species, E. falconeri and E. sivalensis, E. dikikae may have fed on bivalves because of a common incisor arch in the three species which would have been used to crush the shells of the bivalves.[17] However, that would mean that the large canines and the larger points in the crown of its teeth would have no purpose in digesting the food and to further disprove this possibility, there have not been many bivalve fossils found at Dikika.[1] Other possible contributions to the diet of E. dikikae were any prey with a hard exoskeleton like young crocodiles, turtles, ostrich eggs,[1] or molluscs.[8] 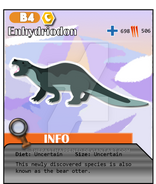 Add a photo to this gallery
Retrieved from "https://dinopedia.fandom.com/wiki/Enhydriodon_dikikae?oldid=111155"
Community content is available under CC-BY-SA unless otherwise noted.