Enchodus is an extinct genus of Actinopterygii-ray-finned fish. It flourished during the Upper Cretaceous. Enchodus survived the Cretaceous–Paleogene extinction event and persisted at least into the Eocene.

Enchodus species were small to medium in size. One of the genus' most notable attributes are the large "fangs" at the front of the upper and lower jaws and on the palatine bones, leading to its misleading nickname among fossil hunters and paleoichthyologists, "the saber-toothed herring". These fangs, along with a long sleek body and large eyes, suggest Enchodus was a predatory species.

The largest-known species of Enchodus is E. petrosus, remains of which are common from the Niobrara Chalk, the Mooreville Chalk Formation, the Pierre Shale, and other geological formations deposited within the Western Interior Seaway and the Mississippi Embayment. Large individuals of this species had fangs measuring over 6 centimetres (2.4 in) in length, though the total body length was only about 1.5 metres (4 ft 11 in), giving its skull an appearance somewhat reminiscent of modern deep-sea fishes, such as anglerfish and viperfish. Other species were smaller, some like E. parvus were only some cm (a few inches) long.

Despite being a formidable predator, remains of Enchodus are commonly found among the stomach contents of larger predators, including sharks, other bony fish, mosasaurs, plesiosaurs and seabirds such as Baptornis advenus.

Enchodus species have been found all over the world. In North America, Enchodus remains have been recovered from most states with fossiliferous Late Cretaceous rocks, including Kansas, Nebraska, Colorado, Alabama, Mississippi, Georgia, Tennessee, Wyoming, Texas, California, North Carolina, and New Jersey. The taxon is also known from coeval strata in Africa, Europe, and southwest Asia. 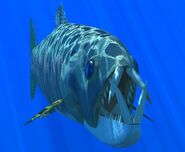 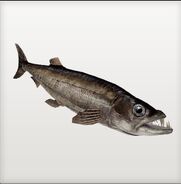 Add a photo to this gallery
Retrieved from "https://dinopedia.fandom.com/wiki/Enchodus?oldid=137773"
Community content is available under CC-BY-SA unless otherwise noted.