Elasmotherium (meaning, "Thin Plate Beast"), more informally sometimes called the Steppe Rhinoceros, is an extinct genus of giant rhinoceros endemic to Eurasia during the Late Pliocene through the Pleistocene, documented from 2.6 million years ago, to as late as 50,000 years ago, possibly later, in the Late Pleistocene, an approximate span of slightly less than 2.6 million years. Three species are recognised.

The best known, E. sibiricum was the size of a mammoth and is thought to have borne a large, thick horn on its forehead which was used for defence, attracting mates, driving away competitors, sweeping snow from the grass in winter and digging for water and plant roots. Like all rhinoceroses, elasmotheres were herbivorous. Unlike any others, its high-crowned molars were ever-growing. Its legs were longer than those of other rhinos and were designed for galloping, giving it a horse-like gait. The Russian paleontologists of the 19th century who discovered and named the initial fossils were influenced by ancient legends of a huge unicorn roaming the steppes of Siberia. To date no evidence either contradicts or confirms the possibility that Elasmotherium survived into legendary times.

Elasmotherium was the largest member of the family of rhinos that lived from the Pliocene to Pleistocene epochs. It was 6 metres long, 2.5 metres in height and weigh up to 5 tons. The main difference from other rhino was the large domed protuberance on the forehead, which was probably a 1.5 metre long and thick horn. Elasmotherium were distributed from western Europe to eastern Siberia.

This animal specialized in feeding on grass and underground parts of plants, coastal rivers and lakes, such as highly starchy rhizomes of sedges, cattail and reed. At the same time periods in local starvation, the animal could walk through very long passages through the watershed, elevated prairie lands, from one river system to another, or even migrate to the south. Significantly, the most northern Elasmotherium findings made it in the river valleys, and not just in the desert, as purely herbivorous horses and woolly rhinos. In favor of power and rhizomes, they have highly strong teeth, a protection against abrasive piles at a feed (sand, dirt, etc).

Various theories of Elasmothere morphology, nutrition and habits have been the cause of wide variation in reconstruction. Some show the beast trotting like a horse with a horn; others hunched over with head to the ground, like a bison, and still others immersed in swamps like a hippopotamus. The use of the horn and whether or not there was one, and how large, have been popular topics. The statistical correlations of modern paleontology have taken much of the speculation out of the subject, although some details remain undetermined.

With the brain, it remained at a relatively low level of organization. Huge olfactory shares were placed in front of small and underdeveloped fore-brain. Others were still in the Miocene, and of rhinoceros characteristics, they were of modern forms which reached complexity of the brain, quick orientation and mobility. This made Elasmotherium lost them outright. Woolly Rhinoceroses and Elasmotherium were later, apparently "reactive", smart, agile and aggressive.

Herbivores can be divided into two general groups on the basis of nutrition, which grade into each other morphologically: "fore-gut fermenter" and "hind-gut fermenter".

The border region is correlated to bulk: up to 600 kilograms (1,300 lbs) – 1,200 kilograms (2,600 lbs) are the former; over it, the latter. In fore-gut fermentation the animal must "browse" to select the most nutritious plants and then ruminate to make up for the shorter digestive tract. The hind-gut fermenter is a "bulk-feeder:" they ingest large quantities of low-nutrient food, which they process for a longer time in a much longer intestine.

The main food in that category is grass, indicating that Elasmotherium, like the elephants, was probably a grassland "grazer" moving over long distances to take advantage of the growth phases of grass in different regions. The standard is not without exception, as Paraceratherium, the largest land mammal ever, with a weight of 15–20 tons, subsisted by browsing the treetops. There are also paleontological indications of the grazing. In general, the normal position of the head can be determined by the angle between a vertical plane coinciding with the occiput of the cranium, which is always vertical, and a plane through the base of the cranium.

A right or acute angle would indicate a head held high for browsing leaves at various heights. Elasmotherium had the most obtuse angle of the Rhinocerotids. It could only reach the lowest levels and therefore must have grazed habitually. This morphological feature favours the identification of the one-horned beast depicted in Rouffignac Cave (shown in this article) as Elasmotherium and lends some validity to the bison-like restorations based on it.

The largest of all the prehistoric rhinoceroses of the Pleistocene epoch, Elasmotherium was a truly massive piece of megafauna, and all the more imposing thanks to its thick, shaggy coat of fur (this mammal was closely related to Coelodonta, also known as the "woolly rhino") and the huge horn on the end of its snout. This horn, which was made of keratin (the same protein as human hair), may have reached five or six feet in length—and if Elasmotherium survived into historical times, it's possible that early humans glimpsing this huge, strange beast may have been inspired to create the legend of the unicorn.

For all its size, bulk and presumed aggressiveness, though, Elasmotherium was still a relatively gentle herbivore—and one well-adapted to eating grass rather than leaves or shrubs, as evidenced by its almost comically heavy, oversized, flat teeth and lack of incisors. 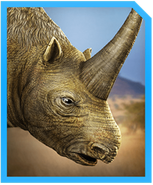 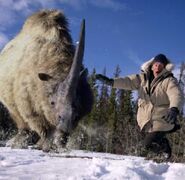 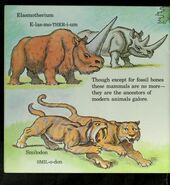 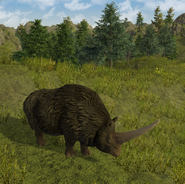 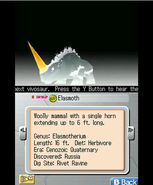 Add a photo to this gallery
Retrieved from "https://dinopedia.fandom.com/wiki/Elasmotherium?oldid=198462"
Community content is available under CC-BY-SA unless otherwise noted.