Elaphrosaurus is a genus of ceratosaurian theropod dinosaur that lived approximately 154 to 150 million years ago during the later part of the Jurassic Period in what is now Tanzania in Africa. Elaphrosaurus was a medium-sized, but lightly-built, bipedal, carnivore, that could grow up to 6.2 meters (20 feet) long. Morphologically, this dinosaur is significant in two ways. First, it has a relatively long trunk but is very shallow-chested for a theropod of its size. Second, its has very short hindlimbs when compared to its relatively long trunk. Phylogenetic analysis indicates that this genus is likely a ceratosaur, and earlier suggestions that it is a late surviving coelophysoid have been examined but generally dismissed.

Elaphrosaurus appears on the holoscape in Jurassic World. 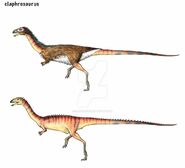 Add a photo to this gallery
Retrieved from "https://dinopedia.fandom.com/wiki/Elaphrosaurus?oldid=145225"
Community content is available under CC-BY-SA unless otherwise noted.