Edaphosauridae (assigned to Eupelycosauria by Cope, 1882) is a family of mostly large (up to 3 meters or more) advanced, Late Pennsylvanian to early Permian pelycosaurs. They were the earliest known herbivorous amniotes, and along with the Diadectidae the earliest known herbivorous tetrapods. The head is small in relation to the bulky body, and there is a tall sail along the back, which may have functioned as a thermoregulatory

device. Edaphosaurid fossils are so far known only from North America and Europe.

Ianthasaurus hardestii was a small edaphosaurid from the Late Pennsylvanian. It was named by Robert R. Reisz and David Berman in 1986. It was discovered by them in the Upper Pennsylvanian Rock Lake Shale near Garnett, Kansas. Ianthasaurus hardestii lacks many of the spectacular specializations seen in Edaphosaurus. For example, the marginal dentition of Ianthasaurus is similar to that of insectivorous reptiles, with slender conical teeth which are slightly recurved at the tips, and there is a slight development of a caniniform region. The palatal and mandibular dentition is unspecialized, and there are no batteries of teeth for crushing of plant materials. Also unlike Edaphosaurus, Ianthasaurus was lightly built and was probably quite agile. The skull was similar to that to Haptodus, a sphenacodontid, though they were distantly related.

Edaphosaurus (pronounced /ˌɛdəfɵˈsɔrəs/) is a genus of prehistoric synapsid which lived around 303 to 265 million years ago, during the late Carboniferous to early Permian periods. The name Edaphosaurus means "ground lizard" and is derived from the Greek edaphos/εδαφος ("ground, land") and σαυρος/sauro s ("lizard"). This genus was first known from remains discovered in North America, in the late 19th century, and described by American paleontologist Edward Drinker Cope. More recently other fossils attributed to Edaphosaurus have been found in the Czech Republic and Slovakia. The most characteristic feature of Edaphosaurus is a sail on its back similar to that of other synapsids of the same time, such as the large apex predator Dimetrodon. However, the sail on Edaphosaurus is different in shape and morphology. Along with the reptile-like family Diadectidae, Edaphosaurus is one of the earliest known large plant-eating tetrapods (land-living vertebrates). Early descriptions, referring to its sharp teeth, suggest that the synapsid may have fed on small invertebrates, such as mollusks, although paleontologists now point out that Edaphosaurus also shows herbivore characteristics.

The head of Edaphosaurus was short and shallow, and remarkably small compared to its body size. The deep lower jaw had powerful muscles and the frontal teeth were barbed at the cutting edges, helping Edaphosaurus to cut bite-sized pieces from tough terrestrial plants. The palate and inside the lower jaw are covered with small teeth forming a large biting surface. The sail along the back of Edaphosaurus was supported by hugely elongated neural spines from neck to lumbar region. As compared with the sail of Dimetrodon, the  vertebral spines are shorter and heavier and bear numerous small cross bars. Edaphosaurus species measured from 1 m (3 ft) to almost 3.5 m (11 ft) in length and weighed over 300 kilograms (660 lb). This large herbivore had a massive wide body, thick tail and short limbs which show that was a slow moving animal.

Edaphosaurus is depicted in the 2005 BBC documentary series Walking with Monsters being preyed upon by Dimetrodon. In the animated television series Dink, The Little Dinosaur, a young Edaphosaurus named Shyler is one of the main characters. 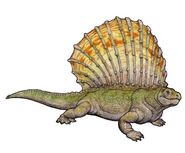 Edaphosaurus pogonias.
Add a photo to this gallery

Lupeosaurids (Lupeosauridae) are eupelycosaurian synapsids mistakenly classified as edaphosaurids, because it is closely related to this family.

Retrieved from "https://dinopedia.fandom.com/wiki/Edaphosauridae?oldid=70150"
Community content is available under CC-BY-SA unless otherwise noted.