Dongbeititan is a genus of sauropod dinosaur from the Early Cretaceous-age Yixian Formation of Beipiao, Liaoning, China. It is based on holotype DNHM D2867, a partial postcranial skeleton including bones from the limbs, shoulder and pelvic girdles, and vertebrae. Its describers suggested it was as a basal titanosauriform, not as derived as Gobititan or Jiutaisaurus, but more derived than Euhelopus, Fusuisaurus, and Huanghetitan. The type species is D. dongi, and it is the first named sauropod from the Yixian Formation, which is part of the well-known Jehol Group. The genus name refers to the region Dongbei and to Greek titan, "giant". The specific name honours the Chinese paleontologist Dong Zhiming. Like other sauropods, Dongbeititan would have been a large quadrupedal herbivore. 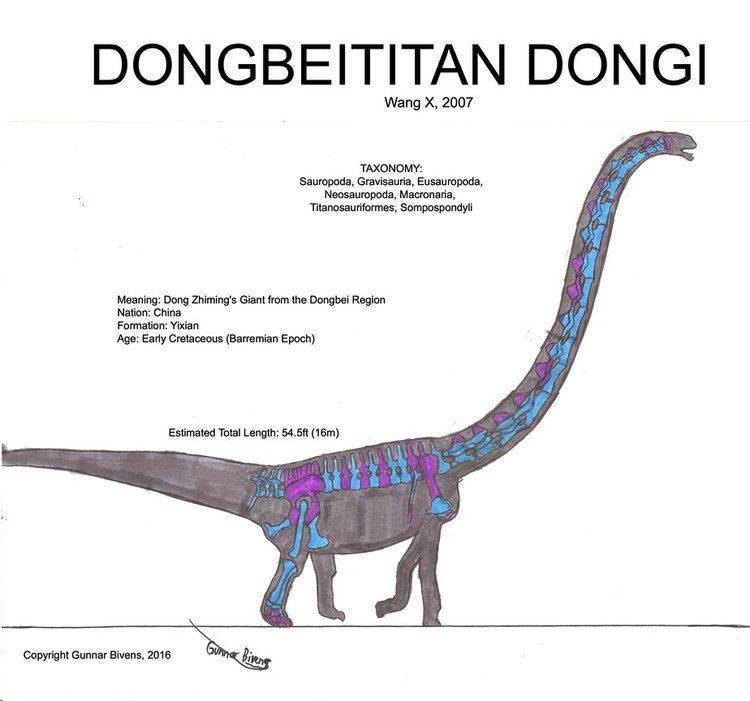 Retrieved from "https://dinopedia.fandom.com/wiki/Dongbeititan?oldid=124458"
Community content is available under CC-BY-SA unless otherwise noted.