Diprotodon was a gigantic marsupial that lived in Australia during the Pleistocene era, about two million years ago. Diprotodon was a herbivorous giant wombat about the size of a rhino, making it the heaviest marsupial ever. It's claws may have been used to fend off predators just like modern wombats do, although this isn't really confirmed, and for now, size would have been its best defense.

Diprotodon herds would forage for roots and leaves in the barren Australian outback, the creature would probably have to eat about a quarter of it's body weight every day to sustain health.

Diprotodon became extinct about 50 thousand years ago due to climate change in Australia, which already had a warm climate that continued heating up, Diprotodon could not adapt to the harsh heat and started dying off. It's now dwindling poulation was hunted to extinction by humans. Predators like Thylacoleo or Megalania soon also became extinct without their food source and the ongoing climate change. 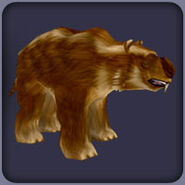 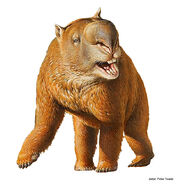 Add a photo to this gallery
Retrieved from "https://dinopedia.fandom.com/wiki/Diprotodon?oldid=135832"
Community content is available under CC-BY-SA unless otherwise noted.