Dinosaur Adventure 3D is a computer-game created by Knowledge Adventure. It was released sometime in 1999.

The game is hosted by Rolf, a Parasaurolophus who leads the player on a journey through Paleo Island. Through an opening video, Rolf explains that a Tyrannosaurus rex has come to the island and begun terrorizing all of the dinosaurs living there; during the predator's rampage, many of the dinosaurs' eggs were abandoned during the attack and become scattered across the island (according to Rolf, this has been going on for some time). Rolf leads the player, alongside his friend, Pterrance the Pteranodon, on a quest to find nine missing eggs and bring them back to the volcano, located at the center of the island, to hatch them in the nursery and use them to their advantage in ridding themselves of the T.rex.

The island is cut into three sections: the Triassic, Jurassic, and Cretaceous periods, all separated by water or deep gorges. The player can explore any of the three periods while Rolf will also provide some fun facts about dinosaur behavior and scientific fossil studies, including miniature videos of the dinosaurs or prehistoric non-dinosaur creatures that they encounter (three viewings of the same video provide different fun facts). Every once in a while, Pterrance will pop up and provide hints on where an egg may be hidden, and the player must use a special hunting crystal to find the egg; the player only gets three guesses, and each wrong answer lures the T.rex closer until it appears out of nowhere and attacks, leaving Rolf and Pterrance to start looking for an egg elsewhere, if the player does not get the correct answer in time. The player can only collect up to three crystals at a time, and if you find an egg and have all three crystals, then the player can bring all back to the volcano and hatch it, and then go back to looking for the other eggs.

Throughout each time period are mini-games which provide the hatching crystals necessary to hatch an egg. There are six mini-games overall, two for each time period. For each game, there are three levels to chose from: easy, medium, and hard.

Rolf must build a map leading to his lost Torosaurus friend(s). The player can make a map consisting of two to three caves, with cards connecting them to complete it and make a path for Rolf to find the other dinosaur. Two caves means just looking for a friend, while three caves will consist of Rolf looking for a lost baby dinosaur and returning it to its mother, the latter only occurring on harder levels. For each card laid on the map are two pictures for the player to choose in order to make the path more fun (e.g., volcano/T.rex cave, carnivorous plants/frozen pond, quicksand/rickety bridge, etc.). For each direction from start to finish or back, Rolf will experience a different encounter with something dangerous and have a different reaction to each one depending on which direction he is going.

Set inside a shiny cave located in the Triassic period.

According to Pterrance, the T.rex has scared a baby Saurolophus onto one of three islands in a sea of tar, where it has become stranded, and he has proven unable to help. Using the cursor or the keys of the keyboard, Rolf must navigate the tar using a bunch of fossils leading multiple ways to the next two islands, while evading sinking into the tar; if Rolf sinks, he must go back to the previous island and the player must start all over again. Eventually, Rolf will find the baby and, with help from Pterrance, saves him and flies him home.

Located in the Triassic period.

The T.rex's stomping has jumbled up a fossil site. Rolf leaves the player to single-handedly assemble one of six skeletons (consisting of Plateosaurus, Apatosaurus, Triceratops, Dimetrodon, Ceratosaurus and even the T.rex himself) found there; the player can choose one a time. Harder levels have it set to a timer set to one minute and will have assembled pieces sent back to the drawing space where the bones are presented, leaving the player to pick the piece again. When the skeleton is completed, it will come to life and Rolf will provide some brief facts about the assembled dinosaur presented.

Located behind a waterfall in the Jurassic period.

Rolf and Pterrance come to a jungle to find a young Brachiosaurus, who has become lost on the far side after being frightened by the T.rex. Rolf possesses twelve pebbles in his hand to make a trail for the Brachiosaurus, and the green light in the left corner must be clicked to start the player's turn. For each pebble the player is limited to one to five steps at a time, making the game more challenging. Rolf will be completely hidden from view once he enters the jungle, but Pterrance will fly over him to give the player a visual on his position. If the player runs out of pebbles or runs into the T.rex, then Rolf will go all the way back to the beginning. Every once in a while, a big red square will pop up to reveal what Rolf has encountered in the jungle, either an obstacle which will send him back a few paces or advance him to move forward. The Brachiosaurus will give out a hatching crystal if the player has not collected any beforehand. The whole game is taken from a high-view advantage point so as to give a full scale to the size of the jungle.

Located in a patch of trees in the Jurassic period.

A matching game in which eggs from several dinosaur species have become jumbled up. Rolf must match two of each before returning them to their rightful parents. The player must a choose an egg with one side, left or right, that is not touching another egg. If the match is correct, it will show a picture of the creature depicted on the egg with a name and quick one-line fact. If possible, if there are any eggs that have a match but are touched on both sides, then the player can shuffle them up to have one side free. When the matching is done, Rolf will show a full-sized picture of one of the dinosaurs and provide a quick fact about it. While 12 of the 36 dinosaurs featured can be found throughout Paleo Island, the rest of the dinosaurs (other than Archaeopteryx) can be found nowhere else in the game.

Located in a cave in the Cretaceous period.

Rolf is dropped into a canyon where a herd of Gallimimus is galloping towards him while being pursued by the T.rex. The player must move the mouse from side to side for Rolf to avoid obstacles and click the button for him to jump if necessary. Along the way, the player can also collect healing plants and blue leaves as bonus points. The end of the game involves jumping a deep crevice at the end of the canyon; if Rolf falls in, the player can either start over or quit the game.

Located in a canyon in the Cretaceous period.

In the ending cinematic, when all nine eggs are collected and hatched, Rolf leads the baby dinosaurs to the top of the volcano to make a ruckus that lures the T.Rex towards them. Rolf and the babies slip out the backside as the T.Rex walks up the volcano, his stomps causing it to shake and eventually erupt, blowing him far away. It blows him far away and he eventually burns to death (from the lava on the erupting volcano). Rolf then explains that over the weeks, peace has returned to Paleo Island. He also says that the T.Rex now has a place where he can be made useful. Finally, the T.Rex changes his attitude. He has had his teeth removed and now acts as a means of transport for other creatures looking to cross canyons or other places. 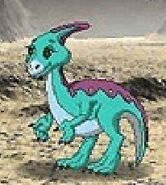 Rolf, a Parasaurolophus who happens to be the host of game

Pterrance, a Pteranodon who happens to be Rolf's pterosaur sidekick 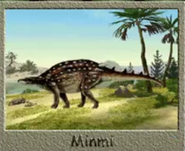