Dinopedia
Register
Don't have an account?
Sign In
Advertisement
in: Diplodocoids, Sauropods, Taxa named by Werner Janensch,
and 12 more

Dicraeosaurus (Gr. δικραιος, dikraios "bifurcated, double-headed" + Gr. σαυρος, sauros "lizard") is a genus of small diplodocoid sauropod dinosaur. It was named for the spines on the back of the neck. The first fossil was described by paleontologist Werner Janensch in 1914.

Unlike most diplodocoids, Dicraeosaurus had a large head with a relatively short and wide neck. The neck contained 12 unusually short vertebrae, so it could probably browse vegetation only from ground level to a height of about 3 metres (9.8 ft).[1] It also lacked the whiplash tail that other diplodocids had. It was smaller, at only reached 12 metres (39 ft) in length. It gets its name, which means two-forked lizard, from the spines that came from the vertebrae. They were not straight as in some members of the family. Each one was “Y” shaped, like a fork. These spines also provided muscle attachment points.[2]

Dicraeosaurus lived in the Late Jurassic. It was herbivorous; however, it didn’t compete with other dinosaurs for vegetation. Fossils have been discovered in the rocks of Tendaguru Hill in Tanzania. The rocks also yield fossils of Giraffatitan and Kentrosaurus. As there was a distinct difference in size between these animals, they would probably have browsed for vegetation at different levels, allowing them to co-exist without significant competition.[2]

The following cladogram follows an analysis by Sereno et al. in 2007.[3] 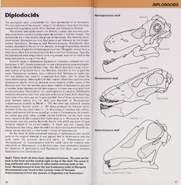 1/3
Community content is available under CC-BY-SA unless otherwise noted.
Advertisement