Diabloceratops is a genus of herbivorous dinosaur in the infraorder Ceratopsia. It lived in and around Utah during the Campanian stage.

Diabloceratops was built like a typical ceratopsian in that it had a large neck frill made of bone. It had a small horn on the nose, perhaps a second horn in front of that, and a pair of relatively small horns above the eyes. Upon the frill it also had a pair of very long spikes, like in Einiosaurus and Styracosaurus. It being one of the earliest centrosaurine ceratopsids, Kirkland noted a character Diabloceratops shared with the more "primitive" Protoceratopsid forms. Both possess an accessory opening in the skull that would become much reduced or disappear in later, more advanced ceratopsids. Kirkland saw this as an indication that the earlier species were not together included in some single natural group but instead presented a gradual sequence of ever more derived forms, increasingly closer related to the Ceratopsidae.

There is speculation that spiders like Nephila may have made their webs in the horns of Ceratopsians like Diabloceratops. It lived 85.5-80 mya. 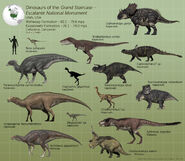 Add a photo to this gallery
Retrieved from "https://dinopedia.fandom.com/wiki/Diabloceratops?oldid=159874"
Community content is available under CC-BY-SA unless otherwise noted.