Start a Wiki
Daeodon is a large species of Entelodont from the late Oligocene to early Miocene of North America. Its name means "hostile" or "dreadful", "teeth" in greek. This species inhabited North America between 29 and 19 million years ago during the middle Oligocene and early Miocene epochs. The species is Daeodon shoshonensis, the last and largest of the entelodonts; known adults of this species possessed skulls about 90 cm (3 ft) in length. It had a broad distribution across the North America; especially United States, but it was never abundant as much as other animals; indicating despite the species evolving; the animal is in decline. 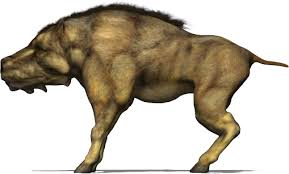 Retrieved from "https://dinopedia.fandom.com/wiki/Daeodon?oldid=144338"
Community content is available under CC-BY-SA unless otherwise noted.