The Cretaceous Period (145-66 mya) is one of the major divisions of the geologic timescale, reaching from the end of the Jurassic Period (i.e. from about 145 to 133 million years ago to the beginning of the Paleocene of the Tertiary Period (about 66 to 56 Ma)). As the longest geological Period, the Cretaceous constitutes nearly half of the Mesozoic. The end of the Cretaceous defines the boundary between the Mesozoic and Cenozoic era..

The Cretaceous (from Latin creta meaning 'chalk') as a separate period was first defined by a Belgian geologist Jean Baptiste Julien d'Omalius d'Halloy in 1822, using strata in the Paris Basin and named for the extensive beds of chalk (calcium carbonate deposited by the shells of marine invertebrates), found in the upper Cretaceous of the continental Europe and Great Britain (including the White Cliffs of Dover).

As with other older geologic periods, the rock beds that define the Cretaceous are well identified but the exact dates of the period's start and end are uncertain by a few million years. No great extinction or burst of diversity separated the Cretaceous from the Jurassic. However, the end of the period is most sharply defined, being placed at an iridium-rich layer found worldwide that is believed to be associated with the Chicxulub Impact Crater in Yucatan and the Gulf of Mexico. This layer has been tightly dated at 66.043 Ma. This bolide collision is probably responsible for the major, extensively-studied Cretaceous-Tertiary extinction event.

The Cretaceous is usually separated into Early and Late Cretaceous Epochs. The faunal stages from youngest to oldest are listed below; time is referred to as early or late, and the corresponding rocks are referred to as lower or upper:

During the Cretaceous, the late Paleozoic - early Mesozoic supercontinent of Pangea completed its breakup into present day continents, although their positions were substantially different at the time. As the Atlantic Ocean widened, the convergent-margin orogenies that had begun during the Jurassic continued in the American cordillera Cordillera, as the Nevadan orogeny was followed by the Sevier orogeny and Laramide orogeny.

Though Gondwana was still intact in the beginning of the Cretaceous, Gondwana itself broke up as South America, Antarctica and Australia rifted away from Africa (though India and Madagascar remained attached to each other). The Indian Ocean was newly formed. Such active rifting lifted great undersea mountain chains along the welts, raising sea level worldwide. To the north of Africa, the Tethys Ocean continued to narrow. Broad shallow seas advanced across central North America (the Western Interior Seaway) and Europe and then started to recede, leaving thick marine deposits sandwiched between coal beds.

The Cretaceous is justly famous for its chalk; indeed, more chalk formed in the Cretaceous than in any other Period in the Phanerozoic.[1] Laid down by Coccolithophores, they reflect seas that were enriched with calcium relative to today's (and hence, more saturation), due to increased mid-ocean ridge activity.

Other important Cretaceous exposures occur in Europe and China. In the area that is now India, massive lava beds called the Deccan Traps were laid down in the very late Cretaceous and early Paleocene.

The climate was very warm during the Cretaceous; there was no ice at the poles. Sea level was much higher than today, and large areas of the continental crust were covered with shallow seas; sediment cores also show that temperatures in the deep ocean were 15-20 °C higher than today.[2] The Tethys Seaway connected the tropical oceans east to west, which also helped equalize the global climate. Warm-adapted plant fossils are known from localities as far north as Alaska and Greenland, while dinosaur fossils have been found within 15 degrees of the Cretaceous south pole.

The planet was probably not much warmer on average than it had been during the Triassic or Jurassic periods but instead had a gentler temperature gradient from the equator to the poles; a side effect of this may have been weaker global winds, contributing to less upwelling and more stagnant oceans than today.[3]

Flowering plants, also known as angiosperms, first appeared, although they did not become predominant until near the end of the Period (Campanian age). Their evolution aided by the appearance of bees; in fact angiosperms and insects are a good example of coevolution. The first representatives of many modern trees, including figs, planes and magnolias, for example, appear in the Cretaceous. At the same time, some earlier Mesozoic gymnosperms, like Conifers continued to thrive, although other taxa like Bennettitales died out before the end of the period.

On land, mammals were a small and still relatively minor component of the animals. The animals were dominated by lizard-like reptiles, especially dinosaurs, which were at their most diverse.

A fascinating glimpse of life in the Early Cretaceous is provided by the Liaoning lagerstätte (Chaomidianzi formation) in China, where the beautifully preserved remains of a number of types of small dinosaurs, birds, and mammals have been found. The coelurosaur dinosaurs found there represent a number of types of the group maniraptora, which is transitional between dinosaurs and birds, and are remarkable for the presence of hair-like feathers.

During the Cretaceous the insects began to diversify, and the oldest known ants, termites and some lepidopterans appeared. Aphids, grasshoppers, and gall wasps appeared. Another important insect to evolve was the eusocial bee, which was integral to the ecology and evolution of flowering plants.

Numerous exceptionally preserved insects have been found in the Lower Cretaceous Siberian lagerstätte of Baissa.

In the seas, rays, modern sharks and teleosts became common. Marine reptiles included ichthyosaurs in the early and middle of the Cretaceous, plesiosaurs throughout the entire period, and mosasaurs in the Late Cretaceous.

Baculites, a straight-shelled form of ammonite, flourished in the seas. The Hesperornithiformes were flightless, marine diving birds that swam like grebes. Globotruncanid Foraminifera thrived. The Cretaceous also saw the first radiation of the diatoms in the oceans (freshwater diatoms did not appear until the Miocene).

In the extinction event that defines the end of the Cretaceous, a significant number of species (~50%) and known families (~25%) disappeared. Plants were nearly unscathed, while marine organisms were hit the hardest. These include a large number (~95%) of types of planktic foraminifers (excepting the Globigerinida), an even larger number of Coccolithophores, all the ammonite and belemnite cephalopods, and all reef-forming rudist molluscs and inoceramid clams), as well as all marine reptiles except Turtles and Crocodiles. Dinosaurs are the most famous victims of the Cretaceous extinction. Dinosaurs that were unique to the very end of the period (such as Tyrannosaurus, Triceratops, and Euoplocephalus) were wiped out. The last of the pterosaurs became extinct and the vast majority of birds did as well, including the Enantiornithes and Hesperornithiformes.

The intensive mid-Cretaceous insect extinction began during the Albian. 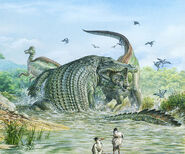 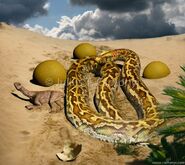 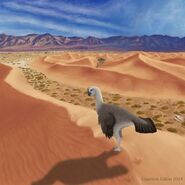 Add a photo to this gallery
Retrieved from "https://dinopedia.fandom.com/wiki/Cretaceous?oldid=137067"
Community content is available under CC-BY-SA unless otherwise noted.