Concavenator corcovatus ("Hunchback Hunter from Cuenca") is a species of theropod from Spain found in September 8, 2010. It can have one to two humps, similar to spinosaurids, on it's back which is speculated to being used for body heat, storing body fat, and it is being argued that it could also be used for communication. Concavenator can grow to be 20 feet long and it's hump can grow to be 16 inches long. It has been speculated that the hump was brightly colored, thus making it noticeable from a mile away. If a Concavenator was healthy, it's hump would be large, probably making it a significant mate and deterring possible rivals and other theropods. Concavenator also likely had proto-feathers on it's arms, giving more evidence to the theory that most dinosaurs had plumage, proto-feathers and a more direct relation to modern avians. 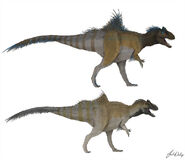 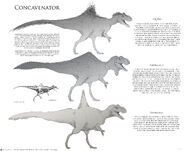 Retrieved from "https://dinopedia.fandom.com/wiki/Concavenator?oldid=197788"
Community content is available under CC-BY-SA unless otherwise noted.