Cimolichthys is an extinct genus of 1.5- to 2.0-meter-long nektonic predatory aulopiformid fish. lthough the closest living relatives of Cimolichthys are lancetfish and lizardfish, the living animals would have resembled very large freshwater pikes. Their bodies were covered by large, heavy scutes. Typical of this species are narrow lower jaws with several series of teeth. Remains of undigested fishes or squids have been found in collected specimens. They lived in the Late Cretaceous period, from the Cenomanian age (99.6 ± 0.9 Mya and 93.5 ± 0.8 Mya) to the Maastrichtian age (70.6 ± 0.6 Mya to 66 Mya). Fossils of Cimolichthys are found in Cretaceous strata of North America (Canada and United States) and Europe.

Cimolichthys appeared in The Land Before Time as a Pike-like creature living in the ocean, ambushing and attempting to eat a Karaurus. 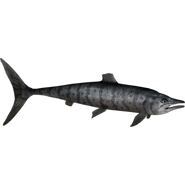 Cimolichthys in The Land Before Time
Add a photo to this gallery
Retrieved from "https://dinopedia.fandom.com/wiki/Cimolichthys?oldid=137169"
Community content is available under CC-BY-SA unless otherwise noted.