Ceratopsia or Ceratopia (/ˌsɛrəˈtɒpsiə/ or /ˌsɛrəˈtoʊpiə/; Greek: "horned faces") is a group of herbivorous, beaked dinosaurs that thrived in what are now North America, Europe, and Asia, during the Cretaceous Period, although ancestral forms lived earlier, in the Jurassic. The earliest known ceratopsian, Yinlong downsi, lived between 161.2 and 155.7 million years ago. The last ceratopsian species became extinct in the Cretaceous–Paleogene extinction event, 66 million years ago.

Early members of the ceratopsian group, such as Psittacosaurus, were small bipedal animals. Later members, including ceratopsids like Centrosaurus and Triceratops, became very large quadrupeds and developed elaborate facial horns and frills extending over the neck. While these frills might have served to protect the vulnerable neck from predators, they may also have been used for display, thermoregulation, the attachment of large neck and chewing muscles or some combination of the above. Ceratopsians ranged in size from 1 meter (3 ft) and 23 kilograms (50 lb) to over 9 meters (30 ft) and 5,400 kg (12,000 lb).

Triceratops is by far the best-known ceratopsian to the general public. It is traditional for ceratopsian genus names to end in "-ceratops", although this is not always the case. One of the first named genera was Ceratops itself, which lent its name to the group, although it is considered a nomen dubium today as its fossil remains have no distinguishing characteristics that are not also found in other ceratopsians. 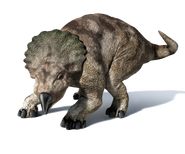 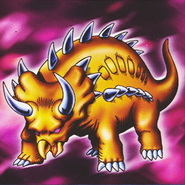 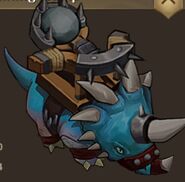 A fictional Ceratopsian with two horns on it's nose and forehead. 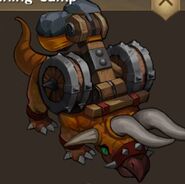 A fictional Ceratopsian with giant horns on it's head and two spikes on the side.
Community content is available under CC-BY-SA unless otherwise noted.
Advertisement