The cave bear (Ursus spelaeus) was a species of bear that lived in Europe during the Pleistocene and became extinct at the beginning of the Last Glacial Maximum about 27,500 years ago. Both the name cave and the scientific name spelaeus derive from the fact that fossils of this species were mostly found in caves, indicating that this species spent more time in caves than the brown bear, which only uses caves for hibernation. Consequently, in the course of time, whole layers of bones, almost entirely those of skeletons, were found in many caves.

Cave Bear's (e.g. Ursus Spelaeus) are extinct species of bears which lived in Eurasia, the Middle and Late Pleistocene and became extinct about 15,000 years ago. The specific name "cave" (Latin spelaeus) is that why Cave Bear's are called that because its bones are found in many caves. The body length of the bear reached 2.7-3.5 metres, which is 30% larger than the modern brown bear. The front part of the body was more developed than the back legs which were short and strong; it also had a massive head. The skull of Cave Bear's differ from the brown bear with a much more steeper forehead, and with the lack of front teeth. It was probably a vegetarian, whose main food consisted of herbaceous plants, and honey. However, in winter, in the cold season, the bear could hunt for prey and other animals.Cave Bear's are found only in Eurasia, which formed in several geographical races, differing in size. The cause of extinction was probably the climate in the late Warm glacial period, when the forest cover has declined sharply, depriving the Cave Bear's food sources. However, the prominent role played in its extinction were probably because of hunting activities of ancient people.

Cave bear skeletons were first described in 1774 by Johann Friederich Esper in his book Newly Discovered Zoolites of Unknown Four Footed Animals. Originally thought to belong to dragons, unicorns, apes, canids or felids, Esper postulated that they actually belonged to polar bears. Twenty years later, Johann Christian Rosenmüller, an anatomist at the Leipzig University, gave the species its binomial name. The bones were so numerous that most researchers held little respect for them. During World War I, large amounts of cave bear bones were used as a source of phosphates, leaving behind little more than skulls and leg bones.

Many caves in Central Europe have skeletons of cave bears inside, for example the Heinrichshöhle in Hemer or the Dechenhöhle in Iserlohn, Germany. In Romania, there is a cave called Bears' Cave where 140 cave bear skeletons were discovered in 1983.spelaeus]]

The Senior bugged cave bear's range stretched across Europe, from Spain to Eurasia, from Italy and Greece to Belgium, the Netherlands and Great Britain, across a portion of Germany through Poland, then south into Hungary, Romania and parts of Russia, Caucasus and northern Iran. There have been no traces of cave bears living in northern Britain, Scandinavia or the Baltic countries, which were covered in extensive glaciers at the time. The largest numbers of cave bear remains have been found in Austria, Switzerland, southern Germany, northern Italy, northern Spain, Croatia, Hungary, and Romania. The huge number of bones found in south, central and east Europe has led some scientists to think that Europe may have once had literal herds of cave bears. Some scientists point out that though some caves have thousands of bones, they were accumulated over a period of 100,000 years or more, thus requiring only two deaths in a cave per year to account for the large numbers.

The cave bear had a very broad, domed skull with a steep forehead. Its stout body had long thighs, massive shins and in-turning feet, making it similar in skeletal structure to the Brown Bear. Cave bears were comparable in size to the largest modern day bears. The average weight for males was 400–500 kilograms (880–1102 pounds), while females weighed 225–250 kg (496–551 lbs). Of cave bear skeletons in museums, 90% are male due to a misconception that the female skeletons were merely "dwarfs". Cave bears grew larger during glaciations and smaller during interglacials, probably to adjust heat loss rate. Cave bears of the last ice age lacked the usual 2–3 premolars present in other bears; to compensate, the last molar is very elongated, with supplementary cusps. The humerus of the cave bear was similar in size to that of the polar bear, as were the femora of females. The femora of male cave bears, however, bore more similarities in size to those of kodiak bears.

Cave bear teeth show greater wear than most modern bear species, suggesting a diet of tough materials. However, tubers and other gritty food, which cause distinctive tooth wear in modern brown bears, do not appear to have constituted a major part of cave bears' diet on the basis of dental microwear analysis.

The morphological features of the cave bear chewing apparatus, including loss of premolars, have long been suggested to indicate that their diets displayed a higher degree of herbivory than the Eurasian brown bear. Indeed, a solely vegetarian diet has been inferred on the basis of tooth morphology. Results obtained on the stable isotopes of cave bear bones also point to a largely vegetarian diet in having low levels of nitrogen-15 and carbon-13, which are accumulated at a faster rate by meat eaters as opposed to herbivores.

However, some evidence points toward inclusion of at least occasional animal protein in the cave bear diet. For example, toothmarks on cave bear remains in areas where cave bears are the only recorded potential carnivores suggests occasional cannibalistic scavenging, possibly on individuals that died during hibernation, and dental microwear analysis indicates that the cave bear may have fed on a greater quantity of bone than its contemporary, the smaller Eurasian brown bear. Additionally, cave bear remains from Peştera cu Oase in the southwestern tip of the Carpathian mountains had elevated levels of nitrogen-15 in their bones, indicative of an omnivorous diet, although the values are within the range of those found for the strictly herbivorous mammoth. Although the current prevailing opinion concludes that cave bears were largely herbivorous, and more so than any modern species of the genus Ursus, increasing evidence points to an omnivorous diet, based both on regional variability of isotopic composition of bone remains indicative of dietary plasticity, and on a recent reevaluation of its craniodental morphology that places the cave bear squarely among omnivorous modern bear species with respect to its skull and tooth shapes.

Death during hibernation was a common end for cave bears, mainly befalling specimens that failed ecologically during the summer season through inexperience, sickness or old age. Some cave bear bones show signs of numerous different ailments, including fusion of the spine, bone tumours, cavities, tooth resorption, necrosis (particularly in younger specimens), osteomyelitis, periostitis, rickets and kidney stones. Male cave bear skeletons have been found with broken baculums, probably due to fighting during breeding season. Cave bear longevity is unknown, though it has been estimated that they seldom exceeded 20 years of age.

Paleontologists doubt adult cave bears had any natural predators, save for pack hunting wolves and cave hyenas which would probably have attacked sick or infirm specimens. Cave hyenas are thought to be responsible for the dis-articulation and destruction of some cave bear skeletons. Such large carcasses were an optimal food resource for the hyenas, especially at the end of the winter, when food was scarce. The presence of fully articulated adult cave lion skeletons, deep in cave bear dens, indicates that lions may have occasionally entered dens to prey on hibernating cave bears, with some dying in the attempt.[[File:Ursus.png|thumb|]

In the second episode of the 2006 ITV science fiction TV series Prehistoric Park, Nigel Marven encountered a Cave Bear and got chased by one, while trying to rescue a Woolly Mammoth. Cave bears died out long before 10,000 years ago unlike in the series. Nigel even pointed this out right after the chase, commenting "Sorry about that I thought they were extinct."

The Cave Bear is a central figure in The Earth's Children books, these were written by Jean M. Auel.

The Cave Bear is featured as a mechanical Zord in Mighty Morphin Power Rangers. 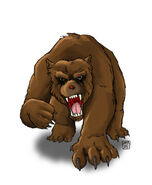 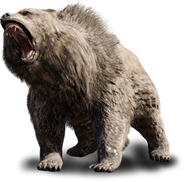 Add a photo to this gallery
Retrieved from "https://dinopedia.fandom.com/wiki/Cave_Bear?oldid=144365"
Community content is available under CC-BY-SA unless otherwise noted.