Brygmophyseter is an extinct genus of toothed whale in the Sperm Whale family. Its genus name is a combination of the Greek word brygmos, which means "biting" or "gnashing" and "Physeter" the living sperm whale genus, and derived from the Greek word meaning "blower". This has led to the occasional vernacular term "biting sperm whale" being given to the species. Unlike the modern sperm whale which has teeth in its lower jaw only, Brygmophyseter has 12 functional teeth on each side of the lower jaws and 12 functional teeth on each side of the upper jaws. A nearly complete fossil specimen of this ancient whale from Japan is about 7 meters (23 feet) long. However, some paleontologists had estimated that Brygmophyseter could had potentially grown up to 12 meters (40 feet) long, however it's overestimated and the true size is 7 meters, and was as large as Great White Shark. It may have employed sonar to track and disorient a prey item in deep waters, like the modern age sperm whales. It may also have used its large head to ram a potential opponent during conflict. Brygmophyseter would also have lived in social groups called pods, and probably hunted in packs, like modern age orcas. Brygmophyseter likely preyed upon a variety of animals including fish, pinnipeds, giant squid, and cetacean and even Megalodon. 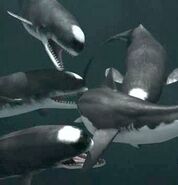 Add a photo to this gallery
Retrieved from "https://dinopedia.fandom.com/wiki/Brygmophyseter?oldid=142407"
Community content is available under CC-BY-SA unless otherwise noted.